Toxicant levels in vapour from gloTM were found to be around 90% less than in cigarette smoke. gloTM, a tobacco-heating product, heats rather than burns tobacco and operates at much lower temperatures than a lit cigarette (approximately 240 degrees C versus 900 degrees C when you burn a cigarette).

'Our studies on gloTM reveal that this product produces significantly lower levels of harmful or potentially harmful components compared to a cigarette,' says Dr James Murphy, Head of Reduced Risk Substantiation at British American Tobacco. 'The vapour produced was found to have significantly reduced numbers and lower levels of toxicants compared to cigarette smoke, and so it should in principle expose consumers to much less toxicants,' he says.

It is the toxicants in smoke that cause most smoking-related diseases.

Scientists at British American Tobacco analysed and compared the vapour from gloTM - a commercially available tobacco heating product (THP) - and smoke from a reference cigarette (3R4F) and found substantial reductions in the gloTM emissions for all smoke toxicant groups measured. Most cigarette smoke toxicants could not be detected in the gloTM vapour.

'This comprehensive chemical assessment is part of a science-based approach that we have developed to demonstrate the reduced-risk potential of THPs and other next generation products relative to smoking cigarettes,' says Murphy. 'We believe that such an approach is essential to communicating to consumers and regulators that the available information on our products is based on sound, evidence-based science,' he says.

The scientists set out to measure 126 substances, including toxicants that have been identified by Health Canada, the US Food and Drug Administration (FDA) and the WHO Study Group on Tobacco Product Regulation (TobReg) as harmful or potentially harmful to health, and other compounds produced by burning tobacco.

A smoking robot was used to generate smoke or vapour in the laboratory in a way that mimics realistic use of the products. Air samples were also produced with which to compare the smoke and vapour.

An analysis of the emissions showed that gloTM produces a much simpler aerosol than cigarettes (Figures 1 and 2). gloTM emitted over 95% less, on average, of 102 of 126 compounds that could be measured, compared to smoke. For the nine toxicants that the WHO proposes for lowering in cigarette smoke, the overall average reduction was 97.1%, while for the 18 requiring mandatory reporting by the FDA, it was 97.5%. Twenty-four substances could not be detected/quantified in the gloTM emissions, smoke or both.

The findings add to a body of evidence that could be used to support gloTM as a potential reduced-risk product compared to conventional cigarettes.

The results are published today in a special issue of the journal Regulatory Toxicology and Pharmacology. 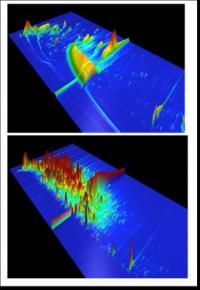