Transplanting wild microbes from healthy related plants can make a native Hawaiian plant healthier and likelier to survive in wild according to new research from The Amend Laboratory in the University of Hawai'i at Mānoa (UHM) Botany Department and the O'ahu Army Natural Resources Program (OANRP). Professor Anthony Amend and postdoctoral researcher Geoff Zahn used microbes to restore the health of a critically endangered Hawaiian plant that, until now, had been driven to extinction in the wild and only survived in managed greenhouses under heavy doses of fungicide.

The plant, Phyllostegia kaalaensis, is in the mint family and only grew in the Waianae mountain range in West Oahu. It is listed as critically-endangered, and from 2002 until now, has only existed in two greenhouses on O'ahu, one managed by the State of Hawai'i and one by the U.S. Army. The major threats to its survival in the wild are habitat loss, invasive animals like pigs and rats, and diseases. In fact, one powdery mildew fungus does so much damage to these fragile plants that, even in a greenhouse, they require monthly fungicide treatments.

One problem with this fungicide-dependence is that plants aren't so different from humans or other animals--when it comes to their health, every plant and animal depends on a collection of beneficial micro-organisms. In plants, the microbes that live in their leaves, stems, and roots, are called endophytes, and "good" fungi make up an important part of this consortium. Endophytic fungi are known to help plants survive droughts, obtain nutrients and minerals, as well as fight off infections. In fact, some of our antibiotics and cancer drugs derive from these endophytes. But when plants are sprayed with fungicides in a greenhouse, it doesn't just kill the fungal diseases, it also kills the beneficial endophytes.

Amend and Zahn wanted to test the idea of whether it was possible to apply "probiotics for plants." They took leaves from a closely related wild that plant was healthy and contained a typical mix of endophytes, blended them into a smoothie and sprayed the mixture onto the leaves of P. kaalaensis to see if beneficial microbes could be transplanted from one species to another. They then subjected these plants, along with a control group, to the deadly powdery mildew. The plants that received the microbial spray were able to resist disease, those that didn?t receive the spray soon died. Using DNA barcode sequencing to identifying which species were inside leaves before, during, and after the disease, Amend and Zahn determined the beneficial fungus that was most likely responsible for protection from disease: the yeast Pseudozyma aphidis. Those treated plants did so well, that they have since been planted out in the wild, and now represent the only wild population of P. kaalaensis on the planet.

"The power of this approach lies in its simplicity," said Zahn. "There are quite a few plant species that only exist in the "purgatory" of managed greenhouses, and quickly succumb to disease when they are taken to the wild and away from their regular fungicide treatments. Spraying these plants with a slurry of beneficial fungi once before outplanting could increase their chances of surviving in the wild." 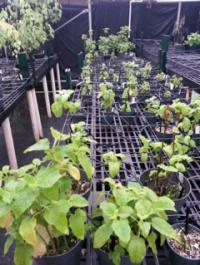 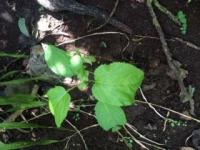 <i>P. kaalaensis</i> outplanted in the wild.