There's nothing new thing under the sun -- except maybe light itself.

Over the last decade, applied physicists have developed nanostructured materials that can produce completely new states of light exhibiting strange behavior, such as bending in a spiral, corkscrewing and dividing like a fork.

These so-called structured beams not only can tell scientists a lot about the physics of light, they have a wide range of applications from super-resolution imaging to molecular manipulation and communications.

Now, researchers at the Harvard John A. Paulson School of Engineering and Applied Sciences have developed a tool to generate new, more complex states of light in a completely different way.

"We have developed a metasurface which is a new tool to study novel aspects of light," said Federico Capasso, the Robert L. Wallace Professor of Applied Physics and Vinton Hayes Senior Research Fellow in Electrical Engineering at SEAS and senior author of the paper. "This optical component makes possible much more complex operations and allows researchers to not only explore new states of light but also new applications for structured light."

The fact that light can even carry orbital momentum is a relatively recent discovery -- only about 25 years old?-- but it's this property of light which produces strange new states, such as beams in the shape of corkscrews.

Previous research has used the polarization of light to control the size and shape of these exotic beams but the connection was limited because only certain polarizations could convert to certain orbital momentums.

This research, however, significantly expands that connection.

"This metasurface gives the most general connection, through a single device, between the orbital momentum and polarization of light that's been achieved so far," said Robert Devlin, co-first author of the paper and former graduate student in the Capasso Lab.

"This is a completely new optical component," said Antonio Ambrosio, Principal Scientist at Harvard Center for Nanoscale Systems (CNS) and co-first author of the paper. "Some metasurfaces are iterations or more efficient, more compact versions of existing optical devices but, this arbitrary spin-to-orbital conversion cannot be done with any other optical device. There is nothing in nature as well that can do this and produce these states of light."

One potential application is in the realm of molecular manipulation and optical tweezers, which use light to move molecules. The orbital momentum of light is strong enough to make microscopic particles rotate and move.

"You can imagine, if we illuminate the device with one polarization of light, it will create a force of a particular kind," said Ambrosio. "Then, if you want to change the force, all you need to do is change the polarization of the incoming light. The force is directly related to the design of the device."

Another application is high-powered imaging. The black hole in the center of the vortex, known as the zero-light intensity region, can image features smaller than the diffraction limit, which is usually half of the wavelength of light. By changing the polarization of light, the size of this center region can be changed to focus different-sized features.

But these beams can also shed light on fundamental questions of physics.

"These particular beams are first and foremost of fundamental scientific interest," said Noah Rubin, co-first author of the paper and graduate student in the Capasso Lab. "There is interest in these beams in quantum optics and quantum information. On the more applied side, these beams could find application in free-space optical communication, especially in scattering environments where this is usually difficult. Moreover, it has been recently shown that similar elements can be incorporated into lasers, directly producing these novel states of light. This may lead to unforeseen applications."

The paper was co-authored by J.P. Balthasar Mueller and supported in part by the Air Force Office of Scientific Research.

A strange new world of light 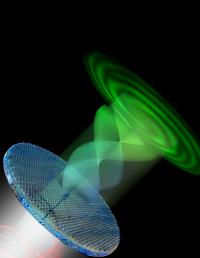