Egyptian fruit bat females living in captivity will consistently take food right from the mouths of their male peers. Now, the team that made that discovery is back with new evidence to explain why the males don't mind. As reported in the journal Current Biology on May 23, those males are often repaid with sex--and offspring.

"We found a strong relationship between producer-scrounger feeding interactions and reproduction," says Yossi Yovel of Tel-Aviv University. "Namely, females bore pups of the males they often scrounged food from."

Their observations revealed that those foraging interactions start many weeks before the mating begins. Over time, the females strengthen those interactions with several males before eventually mating with one of them.

After watching three captive bat colonies over the course of a year, Yovel's team earlier found that either individuals collected food for themselves or they scrounged it from other individuals. This raised an obvious question: why do males allow other individuals and primarily females to literally take food out of their mouths?

There are a variety of potential reasons why animals might be willing to share food. In some cases, food is shared with relatives. In others, the cost of defending food resources just may be too great. But, it's also possible that sharing food sometimes comes with other delayed benefits, including sex.

To explore the food-for-sex hypothesis in the new study, the researchers monitored producer-scrounger interactions of a captive Egyptian fruit bat colony for more than a year. They later determined the paternity of the pups that were born in the colony.

The results were quite clear. Females gave birth to the young of males from which they had scrounged food, lending support for the food-for-sex hypothesis in this species.

There were some other intriguing findings. For instance, the researchers found that there was almost no overlap between males preferred by each female. It suggests that females choose males to scrounge from based on some form of individual preference. Those personal preferences also changed from year to year.

The researchers say that in future studies, they would like to explore how these relationships evolve and change over longer periods of time. They'd also like to find out how these interactions observed in captivity play out in wild populations.

This work was supported by the European Research Council. 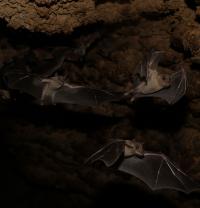