Intestines experience a lot of wear and tear. Without the stalwart stem cells that live in our gut's lining, our ability to absorb food would dwindle and bacteria from the digestive tract would be able to breach the bloodstream. Unfortunately, the regenerative abilities of intestinal stem cells decline with age. However, it may be possible to partially reverse aging in gut stem cells, at least in a petri dish, researchers report in Cell Reports March 14.

"It looks like aging is not a one-way road, at least not for the intestine," says study co-author Hartmut Geiger of Cincinnati Children's Hospital.

Aging in intestinal stem cells leads to changes in villi, the finger-shaped protuberances that line the small intestine and absorb nutrients, and crypts, the valleys between villi where the intestinal stem cells live. To assess the gut stem cells' villi-growing ability, the researchers chopped up samples from gut biopsies into tiny pieces.

"Only the pieces that have stem cells in them will reform part of this intestinal crypt structure when you put them in a petri dish," explains Geiger. "And then you can count how many crypts and villi are there and how complex they look." When the researchers added Wnt to petri dishes housing aged stem cells, those stem cells began growing crypts and villi in patterns resembling their younger counterparts.

When Geiger and his team compared biopsies of intestines from young mice (aged 2-3 months) to older mice (aged 20-22 months), they found that the older mice had fewer villi but that those villi were larger than those from young mice. "The overall architecture of the intestine is different upon aging, so you can clearly see aging-related changes intestinal architecture. That has not been reported in detail before," says Geiger.

It's still unclear what this change in gut architecture means for digestion and age-related gut health problems, but the changes likely affect intestines' ability to heal after wear and tear. Digesting each meal requires the gut to squeeze and stretch, which may damage some cells. And since the gut is also full of microbes, the intestinal lining cells are on the front lines, interacting with bacteria.

"Turnover in the gut is pretty fast. In 1-2 weeks, every cell is replaced by a new one. And why is that? Because it's a very aggressive environment in the intestine," says Geiger. "The turnover of aging stem cells is lower. So they do not make as quickly more differentiated cells as the young ones." Since intestinal stem cells are the only ones that can replace gut lining tissue, their aging affects the entire intestine.

However, the Wnt experiments suggest a promising direction for future research, says Geiger. Even though Wnt proteins are difficult to manipulate, their ability to reverse intestinal stem cell aging suggests a pathway that clinicians may eventually be able to target.

Work in the laboratory was supported by grants from the National Institutes of Health. 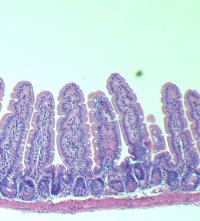 Villi from a Younger Gut