A new Australian bush tomato species, discovered by a team of researchers led by biology professor Chris Martine of Bucknell University, has been named after main character Mark Watney from the book and film The Martian. The authors, among whom is the undergraduate student Emma Frawley, have published the new species in the open-access journal PhytoKeys.

Martine announced the new name, Solanum watneyi, in The Huffington Post last year when he described it as a tribute to the heroic portrayal of Watney as a NASA botanist and engineer who saves himself with plant science expertise after being stranded on Mars.

In fact, Matt Damon's botanist character impressed both the audience and the critics so much that it resulted in several Academy Awards nominations to the whole production team. The actor himself received a Golden Globe among many other prestigious recognitions including the BAFTA for Best Actor and the Critics' Choice Award for Best Actor.

"This is a botanist portrayal that turns an unusually bright spotlight on authentic scientific endeavor," Martine explains the choice. "Scientist heroes are already unusual in Hollywood, but a space-deserted protagonist who studies plants as a profession is something extraordinary."

However, according to Martine, the decision to name the species after Watney also has some taxonomic relevance.

"The plant that Watney manages to grow on Mars is none other than Solanum tuberosum (the potato), a member of the same genus as our new species," he says.

This connection was not missed by Andy Weir, author of the book-turned-movie and father of the Watney character, who expressed his approval of the name on his Facebook page.

"What higher honor could a botanist like Watney ask for than to have a plant named after him?" writes Weir. "And to have it be a relative of the potato as well? Perfect!"

Martine collected specimens of the new species during a six-week expedition to the Northern Territory of Australia with his wife, Rachel, and their two children. Rachel drew the illustration of the species that appears in the PhytoKeys paper.

In order to make sure the new species is not in fact a previously known and closely related Solanum species, the family team collected hundreds of seeds of both species. Thus, the plants could be grown and compared side-by-side in a research greenhouse.

In the summer of 2015, Bucknell undergraduate student Emma Frawley, class 2017, studied the plants, ultimately gathering and analyzing enough morphometric data to confirm the distinctiveness of Solanum watneyi. This is how Frawley, a double major in environmental studies and Spanish, became a co-author of the present paper.

The new species occurs in and around the western part of Judbarra/Gregory National Park, where it was occasionally encountered by regional botanists who nicknamed the oddball plant "Bullita" after the cattle station that once operated in the area.

"The nickname started being applied in the 1970s," said Martine, who studied historical collections of the plant at the Northern Territory Herbarium. "But no one had yet done statistical comparisons between that plant and its similar relative."

Watney is not the only one being recognized by the botanical community following the release of The Martian. In recognition of his botanist star turn, the Botanical Society of America has extended an honorary membership to actor Matt Damon, who portrays the space botanist in the film. 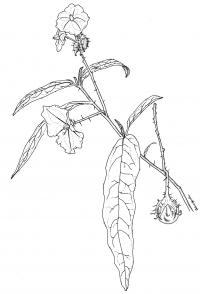