The mollusc Leptogyra bujnitzkii appeared in a biological collection in Russia thanks to the legendary Arctic drift that began on 23 October 1937. Three icebreaking steamers - Georgiy Sedov, Malygin and Sadko - were beset and drifting in the ice following the sea current in the area of the New Siberian Islands. The same current transports drift-wood from the Siberian rivers towards Greenland. In August 1938, the veteran icebreaker Yermak freed the Sadko and Malygin. However, the Sedov, whose rudder was badly damaged, had to be left in the ice 'as a drifting high-latitude station'. This enforced wintering in the Arctic resulted in many scientific discoveries, included the debunking of the myth about the Sannikov Land.

The discoveries, however, continue to be made today. The last among them has been the discovery of sea snails from the subclass Neomphaliones among the exhibits in the collection compiled by the research expedition of the Sadko. The species description was based on only two specimens raised from a depth of about 3800 metres north of the Laptev Sea. Initially, in 1946, the Russian hydrobiologist Grigory Gorbunov assigned it to the genus Ganesa. Then, in 2003, the mollusc was assigned to the genus Skenea. However, in 2020, the experts' opinion about the rare sea snail unexpectedly changed.

'Last autumn, I wrote a conference paper on small molluscs from the genus Skenea,' recalls Ekaterina Krol. ''Our' mollusc was reiterated as a representative of this genus as well, which appeared questionable to me from the very beginning. The day before my presentation at the conference, when I was finishing the paper, it became clear to me that the shell sculpture does not belong to the genus Ganesa. I started searching for more information about similar molluscs and came across representatives of the Leptogyra genus. Our specimens looked very similar. Then we had to prove their kinship.'

Both syntypes at the disposal of Ekaterina Krol were initially studied with a stereo microscope. After that, one of specimens was coated with silver and studied using a scanning electronic microscope at the Interdisciplinary Resource Centre for Nanotechnology at the St Petersburg University Research Park. The research findings confirmed the hypothesis that the mollusc belongs to the genus Leptogyra.

'Unfortunately, knowledge gaps are a common problem in biology,' notes Ekaterina Krol. 'Besides, we are dealing with extremely small snails - representatives of micromolluscs. Their shells are only about 5 to 6 mm in adult size. Previously, such snails were often mistaken for larval shells. Another reason why the error had occurred is insufficient knowledge of the subclass Neomphaliones at the time of its initial description.'

Interestingly, representatives of the genus Leptogyra inhabit extremely unusual environments. For instance, they live in a type of hydrothermal vents, often referred to as 'black smokers', which are found along the mid-ocean ridges. Another habitat of such molluscs is sunken wood. It must have been there that our two specimens were discovered during the expedition.

'The Leptogyra molluscs use decomposing wood as an energy source. Notably, the decaying wood habitat is a very aggressive environment. It is unsafe for living organisms that are not adapted to it. It would be interesting to find out how closely the organisms living on sunken wood are related to species associated with 'black smokers', because these habitats are very different. Getting the specimens from such depths is a challenge, indeed. Hence, there are very few of them at the researchers' disposal,' explains Ekaterina Krol.

According to the researcher, the study findings can indicate the presence of sunken wood biocenoses in the Arctic Ocean. In other words, there may exist a previously unknown type of marine communities using decaying wood as the main source of energy. The closest communities of this type were previously reported in the northern Atlantic Ocean in the Iceland region. 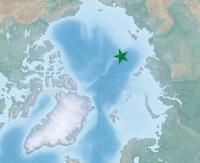 Soviet Arctic Expeditions of the 1930s