Applying techniques derived from classical and quantum physics calculations may radically reduce the time it takes to simulate the way that proteins fold. It's vital to understand the shapes that proteins take on as they fold up because the shapes determine how they function, both in keeping cells running and in leading to various diseases. Rather than calculating the motions of a protein molecule step by step, as most simulations do, a team of Italian and French physicists studied the evolution of a molecule using variational principles. The technique allowed the physicists to evaluate all the possible paths that the molecule's parts would follow and then pick out the most likely one. As a result, they expect to streamline protein folding calculations from trillions of steps to hundreds. The improvement is significant because conventional protein folding simulations that currently require supercomputers or large PC farms could instead be solved with individual desktop PCs running variational principle calculations. The researchers explain that the new application of the old physics method is faster because it allows them to spend less time calculating motions of molecules stuck in quasi-stable intermediate steps along the folding process. The intermediate steps account for vast amounts of wasted computation time in traditional, step-by-step simulations.

Getting a Grip on Nanotubes
Young-Su Lee and Nicola Mazari
Physical Review Letters (forthcoming article, available to journalists on request)

Carbon nanotubes can be hard to manipulate, which isn't surprising considering that they are billionths of a meter in diameter and usually only millionths of a meter long. One solution is to chemically attach molecular handles to their sides to make them easier to move around. Unfortunately, the handles add extra bonds to nanotubes, often distorting them and impairing the electrical and mechanical characteristics that make them desirable in many applications. A pair of physicists at MIT have found a class of molecules that attach to nanotubes without damaging them. Instead of simply grabbing onto the nanotubes, the molecules latch onto the tubes and break some bonds in the nanotube walls. As a result, the sum total of bonds is the same before and after the handle is attached, keeping the nanotube's original characteristics relatively intact. The researchers explain that the handles should make it easier to assemble novel nantube-based optical and chemical sensors.

Wave/particle duality is a quantum phenomenon usually confined to photons, electrons, protons, and other ultra-tiny objects. Quantum mechanics shows that such objects sometimes behave like particles, sometimes behave like waves, and sometimes like a little of both. All objects exhibit wave/particle duality to some extent, but the larger the object the harder it is to observe. Even individual molecules are often too large to show the quantum mechanical behavior. Now physicists at the Université de Paris have demonstrated wave/particle duality with a droplet made of trillions of molecules. The experiment involved an oil droplet bouncing on the surface of an agitated layer of oil. The droplet created waves on the surface, which in turn affected the motion of the droplet. As a result, the droplet and waves formed a single entity that consisted of a hybrid of wave-like and particle-like characteristics. When the wave/droplet bounced its way through a slit, the waves allowed it to interfere with its own motion, much as a single photon can interfere with itself via quantum mechanics. Although the wave/droplet is clearly a denizen of the classical world, the experiment provides a clever analogue of quantum weirdness at a scale that is much easier to study and visualize than is typical of many true quantum experiments.

Physicists have added algae to the list of plants and animals that rely on photonic crystals to manipulate light. Photonic crystals are microscopic patterns of material that can reflect or guide light without relying on pigments and other materials we normally associate with colorful surfaces. Models of the optical properties of holococcolithophore algae, which wear plates made of patterned calcium carbonate, showed that the algae are particularly good at scattering ultraviolet (UV) light. The team of Mexican and Spanish physicists who analyzed the structures speculate that the patterning may serve as a kind of sunscreen, allowing the algae to live high in the water column without the threat of damage from UV rays, while giving them improved access to the light wavelengths that drive photosynthesis. The photonic plates join peacock feathers, beetle carapaces, and butterfly wings in the growing catalog of naturally occurring structures that control light using photonic crystals. 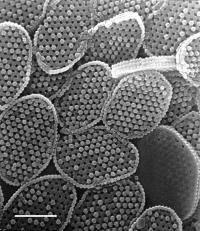