Scientists have for the first time determined the ratio of males to females in a wild foraging group of green turtles in the Eastern Pacific, which suggests that sea turtles may be vulnerable to feminization from the temperature rises expected with climate change. The sex of sea turtles is determined by incubation temperatures on the nesting beaches, with warmer sand temperatures producing more females. Research published recently in the journal PLOS ONE focused on the San Diego Bay aggregation of green turtles (Chelonia mydas), a threatened species that has been studied for more than 25 years, and scientists found that the sex ratio leans heavily toward females.

Six species of sea turtles that inhabit U.S. waters are listed as threatened or endangered under the U.S. Endangered Species Act (ESA), and are thus the focus of extensive protection by NOAA Fisheries and the U.S. Fish and Wildlife Service (USFWS). Data on sex ratios and survival rates of both males and females at foraging sites are important keys to conserving sea turtles because they can help explain trends seen on nesting beaches and determine population abundance.

Because sea turtles are wide-ranging, with a relatively long maturation period, most sea turtle population assessments rely only on data from nesting beaches (e.g. counts of females or nests), limiting our knowledge of population abundance and nesting trends to this female portion of the population. Foraging populations represent a cross-section of life stages (i.e. new immature recruits, juveniles and adults) therefore, characterizing sex ratios at foraging locations can offer greater insight into the overall population sex ratio.

The researchers' study also yielded a safe and effective method of determining the sex of immature turtles, which can provide more complete data on numbers of males and females in wild populations. Determining the sex of an immature turtle at foraging grounds is, otherwise, challenging because sex is not genetically determined and external sexual characteristics (e.g. males have longer tails) are not visible until a turtle reaches maturity.

Until now, the two main techniques applied to determine the sex of immature sea turtles are visualization of the gonads via laparoscopy and analysis of blood plasma testosterone concentration. Laparoscopic sex determination is unequivocal, but is an invasive surgery and requires specialized expertise. So analysis of blood plasma testosterone is more common. Circulating testosterone concentrations are typically measured with radioimmunoassay (RIA), but RIA uses radioactivity, which is essentially a non-starter for many research labs in the U.S. and globally.

A collaborative partnership between NOAA Fisheries, University of Charleston South Carolina, Florida Fish and Wildlife Conservation Commission, Eckerd College, and SeaWorld San Diego provided a great opportunity to try a different approach. Researchers used an enzyme-linked immunosorbent assay (ELISA) - a test that does not require radioactivity. Scientists determined that the ELISA technique is a much more practical approach to determine the sex of juvenile turtles, since (a) it only requires a blood sample rather than invasive laparoscopic procedures, (b) it does not require radioactivity, and (c) it produced immature sea turtle sex determination results that were the same as those from RIA and laparoscopic approaches.

This method may now provide a faster, more efficient method of determining the sex ratio of sea turtle populations because the ELISA can be completed in a single day, the start-up costs are cheaper, and the analysis equipment is small enough that it could be used in the field.

The results of the study of the San Diego Bay aggregation of sea turtles indicated a female bias of 2.83 females to each male among the 69 green turtles sampled. "What really surprised us was that the immature turtles in the San Diego Bay aggregation were even more biased toward females, with 78 percent of them being female," said Camryn Allen, Ph.D., a postdoctoral research fellow at NOAA Fisheries and the lead investigator of the study. So far, the available sex ratio data for green turtles worldwide indicate a female-bias at most foraging ground study sites.

Several factors may explain female biases in sea turtle foraging populations, but the most likely is female-biased hatchling sex ratios. Through better understanding of hatchling sex ratios at nesting beaches, researchers may be able to tell if those ratios are driving similar female biases at foraging grounds. Indeed, many more data are needed to substantiate this trend on a broader scale, but this female bias suggests that climate change may be driving potential feminization considering that sea turtle sex is determined by incubation temperatures (i.e. temperature-dependent sex determination).

The turtles which forage in San Diego Bay are part of the Mexican nesting stock. Once the turtles are sexually mature, they migrate down to Michoacán on the mainland or the Revillagigedo Archipelago for mating and nesting. Although research will be necessary to confirm this possibility, the nesting beaches may be producing a flux of female hatchlings which eventually arrive at distant foraging grounds (e.g. San Diego Bay).

Female-biases in breeding populations may be beneficial for species recovery due to an increase in the number of breeding females, and therefore, population growth potential. However, if the scale tips too far towards females, there may not be enough males to maintain genetic diversity. Unless sea turtles change their behavior (e.g. nest earlier in the season to avoid warmer temperatures), climate change scenarios indicate that certain sea turtle rookeries could tilt to almost all females within the next 10 to 15 years or longer.

More complete information on sex ratios will be informative for predicting climate warming conservation concerns for sea turtles, and sex ratio information for each sea turtle species is vital for inferring population status and the survivorship of males and females. 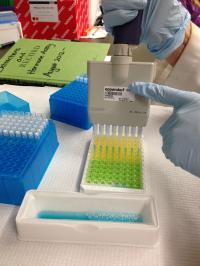