Researchers from TU Delft joined forces with the Center for Space Research (CSR) in Austin, Texas, USA, to develop a method for creating an accurate picture of Greenland's shrinking ice cap. On the strength of this method, it is now estimated that Greenland is accountable for a half millimetre-rise in the global sea level per year. These findings will be published in the scientific journal Geophysical Research Letters in early October.

The research was based on data from the German-American GRACE (Gravity Recovery and Climate Experiment) satellites, two satellites that have been orbiting the earth behind each other since mid-2002. Deviations in the earth's gravitational field cause fluctuations in the distance between the satellites, which is measured to a precision of a millionth of a metre. As gravity is directly related to mass, these data can be used to plot changes in the earth's water balance, such as the disappearance of the ice caps. Satellite data of this kind are ideal for measuring areas such as Greenland, where the extreme conditions make local measurements very difficult. With this in mind, researchers from TU Delft and the CSR devised a method that would create a more accurate picture of the changes taking place in Greenland than had previously been possible.

Greenland lost an average of 195 cubic kilometres of ice per year between 2003 and 2008, which is enough to cause an annual increase in the global sea level of half a millimetre, or 5 cm over the course of the next century. A report recently published by the Dutch Delta commission estimated that the melting ice cap in Greenland would cause the sea level to rise by 13 to 22 cm by 2100. But these two figures do not necessarily contradict each other: whereas the first two years of the study showed a loss of 131 cubic kilometres of ice per year, during the last two years this figure had risen to 222 cubic kilometres per year, an increase of 70 percent. This sharp increase was mainly caused by the extremely warm summer of 2007, when more than 350 cubic metres of ice melted in just two months. However, it is not yet clear whether the ice will continue to melt at this rate during the next few years, as ice loss varies greatly from summer to summer. Long-term observations are needed to compile a reliable estimate of Greenland's contribution to the rising sea level during the next century.

The method used also enables scientists to plot the loss of mass per region, thereby providing new insight into the patterns of ice loss. For example, for the first time since measurements were started, the extremely warm summer of 2007 saw a decrease in the ice mass at high altitudes (above 2,000 metres). It also became clear that the ice loss is advancing towards the North of Greenland, particularly on the west coast. The areas around Greenland, particularly Iceland, Spitsbergen and the northern islands of Canada, seem to be particularly badly affected. A follow-up study will focus on the influence of these smaller glaciers on the sea level.

Please check www.csr.utexas.edu/grace for the original illustrations. Other related pictures can be found at http://svs.gsfc.nasa.gov/.

An accurate picture of ice loss in Greenland 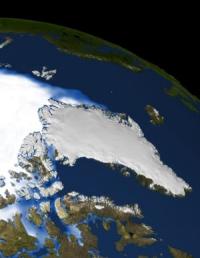