A careful re-analysis of data taken at the Department of Energy's Thomas Jefferson National Accelerator Facility has revealed a possible link between correlated protons and neutrons in the nucleus and a 35-year-old mystery. The data have led to the extraction of a universal function that describes the EMC Effect, the once-shocking discovery that quarks inside nuclei have lower average momenta than predicted, and supports an explanation for the effect. The study has been published in the journal Nature.

The EMC Effect was first discovered just over 35 years ago by the European Muon Collaboration in data taken at CERN. The collaboration found that when they measured quarks inside a nucleus, they appeared different from those found in free protons and neutrons.

"There are currently two main models that describe this effect. One model is that all protons and neutrons in a nucleus [and thus their quarks] are modified and they are all modified the same way," says Douglas Higinbotham, a Jefferson Lab staff scientist.

"The other model, which is the one that we focus on in this paper, is different. It says that many protons and neutrons are behaving as if they are free, while others are involved in short-range correlations and are highly modified," he explains.

Short-range correlations are fleeting partnerships formed between protons and neutrons inside the nucleus. When a proton and a neutron pair up in a correlation, their structures overlap briefly. The overlap lasts just moments before the particles part ways.

The universal modification function was developed from a careful re-analysis of data from an experiment conducted in 2004 using Jefferson Lab's Continuous Electron Beam Accelerator Facility, a DOE Office of Science User Facility. CEBAF produced a 5.01 GeV beam of electrons to probe nuclei of carbon, aluminum, iron and lead as compared to deuterium (an isotope of hydrogen containing a proton and neutron in its nucleus).

When the authors compared the data from each of these nuclei to deuterium, they saw the same pattern emerge. The nuclear physicists derived from this information a universal modification function for short-range correlations in nuclei. They then applied the function to the nuclei used in measurements of the EMC Effect, and they found that it was the same across all measured nuclei that they considered.

"Now we have this function, where we have neutron-proton short-range correlated pairs, and we believe that it can describe the EMC Effect," says Barak Schmookler, a former MIT graduate student and now Stony Brook University postdoctoral scientist who led this research effort and is the paper's lead author.

He says that he and his colleagues think what's going on is that the roughly 20 percent of the nucleons in a nucleus's correlated pairs at any one time has an out-sized effect on measurements of the EMC Effect.

"We think that when protons and neutrons inside the nucleus overlap in what we call short-range correlated pairs, the quarks have more room to maneuver, and therefore, move more slowly than they would in a free proton or neutron," he explains.

Higinbotham says whether or not this detailed picture of what's happening in the nucleus can be confirmed, for now, the universal modification function does seem to tie all of the elements of this mystery together in a self-consistent way.

"So, we've shown that pairs are pairs and they behave the same way, whether they are in a lead or a carbon nucleus. We've also shown that when the number of pairs are different because they are in different nuclei, they are still collectively acting in basically the same way," Higinbotham explains. "So what we think we've found is that with one physical picture, we can explain both the EMC Effect and short-range correlations."

If it holds up, that physical picture of short-range correlations as the cause of the EMC Effect also accomplishes another step toward a long-time goal of nuclear and particle physicists to connect our two different views of the atom's nucleus: as it being made up of protons and neutrons, versus as it being made up of their constituent quarks.

The nuclear physicists have already begun working on the next step in confirming this new hypothesis, which is to measure the quark structure of protons engaged in short-range correlations and compare that with un-correlated protons.

"The next thing we're going to do is an experiment that we're running in Jefferson Lab's Experimental Hall B with the Back-Angle Neutron Detector. It will measure the proton when it's in deuterium and moving at different speeds. So, we want to compare slow- and fast-moving protons" says Lawrence Weinstein, a lead coauthor and Professor & Eminent Scholar at Old Dominion University. "That experiment will get enough data to answer the question. This one points strongly to an answer, but it's not definitive."

Beyond that, the next goal of the collaboration is to begin considering how short-range correlations and the EMC Effect may be researched further at a future potential electron-ion collider. The collaboration is now working on a project to determine the best way to accomplish that goal, using funds provided by Jefferson Lab's Lab-Directed R&D program.

This analysis was carried out as part of the Jefferson Lab Hall B Data-Mining project. The project is supported by DOE's Office of Science. The research was also supported by the National Science Foundation, the Israel Science Foundation, the Chilean Comisión Nacional de Investigación Científica y Tecnológica, the French Centre National de la Recherche Scientifique and Commissariat a l'Energie Atomique, the French-American Cultural Exchange, the Italian Istituto Nazionale di Fisica Nucleare, the National Research Foundation of Korea, and the UK's Science and Technology Facilities Council. 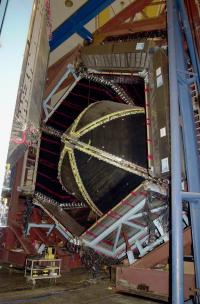