Patterned feathers, previously thought to be used only for camouflage in birds, can play an important role in attracting a mate and fending off rivals, a University of Melbourne study reveals.

Ms Thanh-Lan Gluckman, co-author of the paper and Masters of Philosophy student from the Department of Zoology at the University of Melbourne, Australia, said this finding brought a new perspective to research in animal communication and evolution.

"The implication of this study is that feathers don't need to be bright and showy to be used in sexual signalling and hence this changes our understanding of animal communication," she said.

Hundreds of bird species such as Zebra Finches and Cuckoos have "barred" patterns on their feathers, which are made up of horizontal bars alternating dark and light pigmentation side by side.

"Since Darwin wrote of visual communication in birds, we have known that bright coloured feathers play a role in sexual signalling, for example to attract females. But the role of barred patterns as a communication signal has largely been overlooked," Ms Gluckman said.

The study was a large-scale comparison of plumage of around 8900 bird species worldwide (90% of all bird species), and was conducted with former University of Melbourne lecturer Dr. Gonçalo Cardoso, now at the Research Centre in Biodiversity and Genetic Resources (CIBIO), Portugal.

The researchers compared barred plumage and other patterns on the body of males, females, and juvenile birds, to assess what they might be used for.

"Furthermore, we found these differences on the front of the birds, which is an important area for communication during face-to-face interactions, not on their back, which is more useful for camouflage when running away or hiding from predators," she said.

"This is an exciting finding showing an elegant evolutionary solution to the needs of birds to camouflage as well as to signal to a potential mate or rival."

The study has been published in the prestigious Journal of Evolutionary Biology. 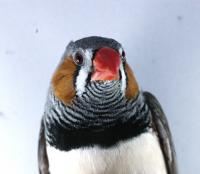