Tropical Cyclone Enawo has continued to intensify while moving toward Madagascar. NASA's Aqua satellite showed the development of an eye, while the Global Precipitation Measurement mission or GPM found heavy rainfall in the storm.

Enawo had winds of about 103.6 mph (90 knots/166.7 kph) when the GPM core observatory satellite flew over on March 6, 2017 at 0306 UTC (0606 a.m. local time/ Mar. 5 at 10:06 p.m. EDT). These powerful winds make Enawo the equivalent of a category two hurricane on the Saffir-Simpson Hurricane wind scale. GPM revealed that the tropical cyclone had heavy rainfall in distinct feeder bands on the western side and in the northeastern side of the eyewall. Precipitation was measured by GPM's DPR falling at a rate of over 220 mm (8.7 inches) per hour in intense downpours.

GPM's radar (DPR Ku Band) was used to perform a 3-D inspection of storms in the feeder bands on the western side of the tropical cyclone. This evaluation showed that many of these storms were reaching altitudes above 16 km (9.9 miles). GPM is a joint mission between NASA and the Japanese space agency JAXA.

About seven hours later at 10:10 UTC (5:10 a.m. EST) the Moderate Resolution Imaging Spectroradiometer or MODIS instrument aboard NASA's Aqua satellite captured a visible image of Tropical Cyclone Enawo. The MODIS image showed powerful thunderstorms wrapped around the eye of the storm, while a thick band of thunderstorms fed into the low-level center from the north and west. Part of that band of thunderstorms were over northeastern Madagascar. 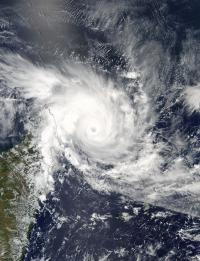 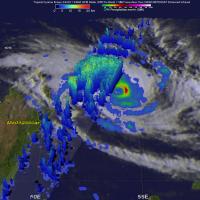