What if there is a major earthquake near Cologne? This scenario is the subject of the "Risk Analysis in Civil Protection 2019", whose report was recently submitted to the German Bundestag (document: Bundestag Drucksache 19/23825). In the 125-page document, a group of experts has listed in detail, on the basis of extensive research work, what effects can be expected in the event of strong ground movements. What Germans usually only know from TV and media reports from other countries is the result of a modeling of a strong earthquake near the megacity of Cologne: ground shaking, damaged and destroyed houses, blocked roads, many injured and dead.

The German Research Center for Geosciences GFZ and its researchers played a central role in this analysis. The GFZ had the task of modeling the ground movements caused by such an earthquake and quantifying possible damage to the city's buildings. In particular, new geophysical models for the Lower Rhine Bay were developed to estimate the influence of the near-surface layers of the subsoil on ground movements. The researchers created a "building-by-building" model of the city in order to quantify the number and vulnerability of buildings that could be affected by the earthquake.

Marco Pilz, scientist of the GFZ section earthquake hazard and dynamic risks, describes the fictitious initial situation: "At a depth of only a few kilometers, a tectonic fault ruptures in the Lower Rhine Bay. Only seconds later the shock waves reach the surface and the nearby city of Cologne. The ground starts to shake, buildings creak and sometimes collapse, streets are blocked by falling debris. Good knowledge of the local underground conditions has shown us that these conditions must be taken into account for an accurate modeling of the shaking".

Based on this, a building-related damage assessment suggests that major impacts can be expected in the city of Cologne. "Old buildings are likely to be particularly affected, so that the distribution of damage in the city area could be quite heterogeneous," adds Cecilia Nievas, a researcher from the same section. "Of the estimated 170,000 residential buildings in the city, more than 10,000 could suffer moderate to severe damage according to our calculations".

The further effects, for example on utilities, are more difficult to assess and require detailed investigations: How many hospitals are affected, what capacities remain for the treatment of the injured, and how well do emergency services reach affected regions? GFZ-researcher Pilz: "Although we at GFZ had contributed a large part to this risk analysis, what was remarkable about the cooperation was the involvement of many experts from federal and state authorities, the district government, the affected districts, the cities and their immediately affected services such as the fire department, THW, railroads and energy suppliers. Everyone has worked together, from the very top down to the local level".

Section head Fabrice Cotton adds: "It was a very productive exchange of information. The elaboration of such scenarios is important because they provide an effective tool for dialogue with the authorities and for understanding their needs when planning relief operations. Such exercises can also help to gain a complete overview of the entire seismic risk chain (from the physics of the earthquake to its effects) and to work at the interface between different scientific disciplines (e.g. here between seismology and civil engineering)".

Location of the Earthquake Scenario in the Cologne Area 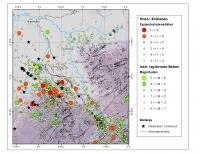