Time flows, time flies, time stands still. All these expressions show just how highly variable, depending on multiple factors, our perception of the passage of time can be. How is this subjective experience embodied in the human brain? Scientists in Portugal have begun to unravel this fundamental question.

A team of neuroscientists at the Champalimaud Centre for the Unknown, in Lisbon, has discovered that the activity of certain neurons in a deep region of the mouse brain can be manipulated to induce the animal to under- or overestimate the duration of a fixed time interval. In other words, they have, for the first time, identified neural circuitry that modulates judgments of elapsed time -- at least in the mouse brain.

These results, which have now been published in the journal Science by Joe Paton, principal investigator of the Learning Lab, PhD student Sofia Soares and post-doc Bassam Atallah, offer a neurobiological answer to the long-standing question of how the brain produces such variable estimates of time. And not only that: they may also help to explain why time seems to fly when we are having fun, or to endlessly stretch when we are bored.

The group has been studying the neuroscience of how duration is judged for a number of years now, as part of a larger interest in understanding how the brain learns to link causes with effects even over extended over time periods. However, never has the work felt so personally relevant. Recently, two of Paton's friends were in a serious accident. "The few hours between when we knew about the accident, and when we knew that they would be ok... felt like weeks. In retrospect, I wonder what role these neurons we have been studying might have played in that illusion."

The passing of time seems such an elusive concept that studying it from the neurobiological point of view might appear short of impossible. Unlike vision or audition, time judgement is not can't be traced back to a sense organ like the eye or the ear, Paton explains, making its neural underpinnings all the more difficult to pinpoint.

But the challenge with time goes deeper than this: the objective existence of time itself and its flow, which we so unequivocally exists for each and every one of us, has actually been questioned by some theoretical physicists. And yet, the ability to estimate duration is obviously crucial for any animal's survival: for example, imagine an rabbit feeding in open terrain. The more it lingers, the greater the chances that a predator might sneak up on it. "Timing is important for extracting information from the environment and deciding when to expect something to happen or when to engage or disengage from an action", says Paton.

So no wonder we all feel it... But what in the brain could be generating this vital, subjective experience?

To unravel the neurobiology of this inner and universal perception, the team had an idea of where to look. Specifically, they were interested in studying certain dopamine-releasing neurons (dopamine is one of the brain's chemical "messengers", or neurotransmitters), in structure deep in the brain, called the substantia nigra pars compacta, that is known to play a role in temporal processing.

"Dopamine neurons are implicated in many of the psychological factors and disorders associated with changes in time estimation", the authors write in Science. Factors such as motivation, attention, sensory change, novelty, and emotions like fear or feeling happy: "Give a fearful stimulus to a rat, and his dopamine release hits the floor", Paton says. In humans, the destruction of the substantia nigra causes Parkinson's disease, which is also known to impair the perception of time.

An additional reason for choosing to look more closely at these neurons was that they project onto another brain structure, called the striatum, which Paton's group had thoroughly previously studied and found to carry the information to support timing behavior. And, in particular, they knew that removing the input of these dopamine neurons to the striatum "can cause a selective deficit in timing", as they also explain in their paper.

The scientists started by training mice to perform a task that involved timing. "Training animals to make categorical judgments in order to study perception is not new", Paton adds. It's been done for decades in sensory modalities like vision, for example.

Such an approach has even been used to study timing. "However, when we first set out to train mice to report their judgement of time, there was real doubt whether it could even be done!", says first author Atallah. To achieve this, the authors had to use modern molecular and genetic tools that allowed both measuring and manipulating dopamine neurons on a fast timescale. "Nobody had managed to do this with respect to the passage of time", says Soares. "Up to now, there were many contradictory results regarding dopamine's role in time perception", she adds.

What did they do exactly? "We trained mice to estimate whether the duration of the interval between two tones was shorter or longer than 1.5 seconds", Paton explains. "After months of training, they became pretty good at it."

Mice indicate their choice but placing their snout at either a right (shorter) or left (longer) port. During the task, the interval between the tones was made to vary, and if the mice chose the right answer (they correctly estimated time), they were rewarded.

The second part of the work consisted in passively measuring signals that reflect the electrical activity of dopamine neurons in the substantia nigra pars compacta using a technique called fiber photometry, while mice performed the task.

Specifically, using genetic tools the neurons made to fluoresce when active, the team measured the intensity of the emitted light. Since the fluorescence "is an indicator of the electrical activity of a number of these neurons around the optical fiber tip, this allowed us to indirectly monitor the variation of those neurons' activity during the task", Paton explains. Using this technique, the scientists observed an increase in the neurons' activity at the onset of both the first and the second tones. This suggested that the neurons might be effectively involved in the task. But more importantly, the team discovered that the increase of neural activity itself did not always have the same amplitude - and this was the clue they needed.

The conditions under which the dopamine neuron response predicted judgments suggested that electrical activity in these cells was actually strongly correlated with the animals' judgement of the passage of time.

"The neurons seemed to reflect information about the estimation of duration by the animals. But might they actually be controlling their sense of time?", asks Paton.

To address this, they performed a third round of experiments, by taking advantage of a technique called optogenetics, where they used light to manipulate (stimulate or silence) these neurons in a specific and fast way in order to see the impact on the animals' behavior during the task.

"We found that if we stimulated the neurons, the mice tended to underestimate duration, and if we silenced them, they tended to overestimate it", Paton explains. "This result, together with the naturally occurring signals we observed in the previous experiments, demonstrate that the activity of these neurons was sufficient to alter the way the animals judged the passage of time. This was the major result of our study."

Can it be extrapolated to humans? Do we have the same type of neurons, do they control the way we perceive duration, and could they be manipulated to alter our subjective experience of the passage of time? How might this effect contribute to symptoms of attention deficit disorder or substance addiction that are thought to involve dysfunction of the dopaminergic system? According to the authors, it is very likely that a similar circuit is at work in the human brain. But the problem is, warns Paton, that what they now measured in mice cannot be said to be a percept, because the animals' cannot tell us what they felt.

"When we study animals, the only thing we can measure is the animal's behavior. But we are never sure of what they perceive", he says. "We interpret this as 'a subjective experience of the animal', but it's no more than an interpretation. And that's the best we can do."

Even so, Paton likes to "wildly speculate", as he calls it. "There's this cliché about young lovers staying up all night talking, and not feeling time go by." It might be those dopamine neurons at work shrinking time in a spectacular way.

Neurons that control judgment of time discovered in the mouse brain 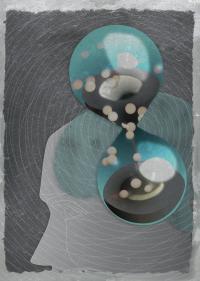