It's a fiercely debated question amongst palaeontologists: was the giant 'terror bird', which lived in Europe between 55 to 40 million years ago, really a terrifying predator or just a gentle herbivore?

New research presented at the Goldschmidt conference in Florence today (Thursday 29th August) may finally provide an answer. A team of German researchers has studied fossilised remains of terror birds from a former open-cast brown coal mine in the Geiseltal (Saxony-Anhalt, Germany) and their findings indicate the creature was most likely not a meat eater.

The terror bird – also known as Gastornis – was a flightless bird up to two metres in height with an enormous, ferocious beak. Based upon its size and ominous appearance, scientists have long assumed that it was a ruthless carnivore.

"The terror bird was thought to have used its huge beak to grab and break the neck of its prey, which is supported by biomechanical modelling of its bite force," says Dr Thomas Tütken, from the University of Bonn. "It lived after the dinosaurs became extinct and at a time when mammals were at an early stage of evolution and relatively small; thus, the terror bird was though to have been a top predator at that time on land."

Recent research has cast some doubt on its diet, however. Palaeontologists in the United States found footprints believed to belong to the American cousin of Gastornis, and these do not show the imprints of sharp claws, used to grapple prey, that might be expected of a raptor. Also, the bird's sheer size and inability to move fast has made some believe it couldn't have predated on early mammals – though others claim it might have ambushed them. But, without conclusive findings either way, the dietary inclinations of Gastornis remain a mystery.

Dr Tütken and his colleagues Dr Meinolf Hellmund, Dr Stephen Galer and Petra Held have taken a new geochemical approach to determine the diet of Gastornis. By analysing the calcium isotope composition in fossilised bones, they have been able to identify what proportion of a creature's diet was plant or animal and, on that basis, their position in the food chain of the local ecosystem. This depends on the calcium isotopic composition becoming "lighter" as it passes through the food chain. They tested the method first with herbivorous and carnivorous dinosaurs – including top predator T-Rex – as well as mammals living today, before applying it to terror bird bones held in the Geiseltal collection at Martin-Luther University in Halle.

Their results show that the calcium isotope compositions of terror bird bones are similar to those of herbivorous mammals and dinosaurs and not carnivorous ones. Before the debate is finally closed, however, the researchers want to cross check their data using other fossil assemblages to be completely sure.

"Tooth enamel preserves original geochemical signatures much better than bone, but since Gastornis didn't have any teeth, we've had to work with their bones to do our calcium isotope assay," explains Dr Tütken. "Because calcium is a major proportion of bone – around 40% by weight – its composition is unlikely to have been affected much by fossilisation. However, we want to be absolutely confident in our findings by analysing known herbivores and carnivores using fossilised bone from the same site and the same time period. This will give us an appropriate reference frame for the terror bird values."

Research suggests terror bird's beak was worse than its bite 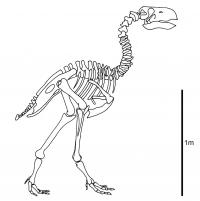