The next time you eat a bowl of rice you might appreciate the fact that the rice paddy fields that produced the rice might have allowed an inland migratory bird to fuel by feeding on insects during its monumental journey covering thousands of kilometers across oceans.

Scientists in Japan set out to track the journey of migratory birds with the use of GPS tracking devices, allowing for detailed data on their routes. The little ringed plover (Charadrius dubius) is an inland freshwater wader. This particular group of plover's migration routes is East Asian-Australasian, but little ringed plovers can be found in many parts of the world including Europe. Their flyway had not been studied in-depth, unlike other species of migratory birds who are coastal.

The research group lead by Satoe Kasahara of Shinshu University began their study of the birds at the gravel ground bank of the Chikuma River in Nagano City in the early summer of 2017. This location happens to be very close to the location of the Shinkansen bullet trains that got submerged in water during typhoon Hagibis in October of 2019. In 2017, at the time of the study, the river had also flooded (to a lesser extent) which shortened the breeding period of the little ringed plover. Despite the unfavorable odds, uncertainties and obstacles, the research team successfully completed this research which relied on the return of the birds a year later to the same site, a likelihood that is said to be 30%.

"I have nothing but gratitude for the plovers," Assistant Professor Kasahara reiterated; without them, the researchers could not have elucidated the routes and habitat of plovers. By understanding their favored grounds and annual life cycle activities, conservation efforts and breeding could be more successful.

The team was lucky some of the birds returned the following year, allowing Assistant Professor Kasahara to let out a big sigh of relief upon their serendipitous reunion. Her team diligently recaptured 3 males and 3 females at the same breeding site along the Chikuma River in Nagano. Two birds returned with complete data sets. This included the wintering site and autumn and spring migration routes. Two had incomplete spring migration data because the GPS stopped working. The remaining two birds only had migration data until mid or late October, also because the GPS stopped working or the antenna for position fixing was lost. All were healthy, uninjured and released after data retrieval.

The birds travelled 3108 to 4226 kilometers over 32 to 136 days to their wintering sites. To put this into perspective, a flight from New York to Los Angeles is a little less than 4000km. A flight from New York to London is 5600km. Wintering areas were defined as the place where plovers stayed for more than 2 months without long-distance flight (more than 50km). The accuracy of the data points allowed the researchers to learn that rice paddy fields were the plover's preferred place to stay. The researchers noticed the plovers used rice paddies more in the non-breeding season when the birds are in the southern nations such as Taiwan and the Philippines. These locations have rice cultivation year-round allowing for the birds to have dependable access to insects in wet locations.

In the spring, the plovers travelled faster northbound, perhaps eager to increase the success of their breeding. Little ringed plovers breed in open gravel grounds. If open gravel grounds near freshwater are maintained in Japan, plovers will likely continue to breed successfully due to their ingrained tendency to return to previously occupied sites.

Migratory birds are on the decline world-wide with an increase in human activity and habitats decreasing. It is crucial for their conservation that we understand how these migratory wading birds live. The change in management of rice paddy fields may have negatively impacted the reliance of wading birds on rice paddy fields where new drainage systems decreased the availability of insects.

The Kochi-dori, as the plovers are called in Japan are truly amazing birds, displaying a range of intriguing characteristic behaviors such as injury feigning and the rodent run, which mimics the way small rodents run to confuse potential predators. Assistant Professor Kasahara hopes to continue the study of the little ringed plover whose routes may differ according to different breeding sites. Through studying birds of different breeding sites, new crucial habitats may be elucidated. Floods halted the breeding season prematurely in 2017. If this had not occurred, the plovers may have stayed longer in Japan. Assistant Professor Kasahara hopes to continue research to elucidate differences according to year.

This research was conducted with legal permission from local and national governments. 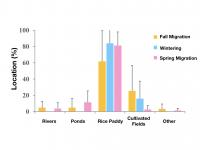 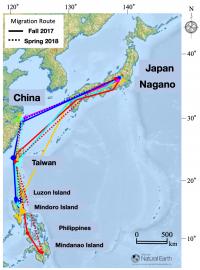