First comprehensive estimates from mainland China of the proportion of people with COVID-19 who required hospitalisation, and latest death rate estimates, both show sharp increases with age. Authors warn that without intervention the number of people needing hospital treatment is likely to overwhelm even the most advanced healthcare systems worldwide, though caution that as the pandemic unfolds, it is possible that outcomes could improve and it will be important to revise estimates in this study.

The new analysis also finds that the estimated proportion of deaths from both diagnosed cases and from milder, unconfirmed cases is strongly influenced by age. The estimates are slightly lower than others that have been made for the virus, but are still much higher than for previous pandemics such as 2009 pandemic influenza H1N1, which was estimated to be fatal in around 0.02% of cases [1]. The new estimates are based on an analysis of 70,117 laboratory-confirmed and clinically-diagnosed cases in mainland China [2], combined with 689 positive cases among people evacuated from Wuhan on repatriation flights.

"This study provides critical estimates on the proportion of people requiring hospitalisation which, when applied to the UK population, enabled us to get a handle on how many people might need to access NHS services," says Professor Neil Ferguson from Imperial College London, UK. "As the UK epidemic unfolds, more data are becoming available, and at the moment the proportion of people in each age group most likely to require hospitalisation, and most likely to die from infection, are consistent with the estimates in this study." [3]

The authors warn that as 50% to 80% of the global population could be infected with COVID-19 [4] the number of people needing hospital treatment is likely to overwhelm even the most advanced healthcare systems worldwide. However, they caution that it is possible that outcomes could improve, in which case it will be important to revise the estimates in this study.

"Our estimates can be applied to any country to inform decisions around the best containment policies for COVID-19," says Professor Azra Ghani from Imperial College London, UK. "There might be outlying cases that get a lot of media attention, but our analysis very clearly shows that at aged 50 and over, hospitalisation is much more likely than in those under 50, and a greater proportion of cases are likely to be fatal." [3]

Previous estimates of deaths from confirmed cases of COVID-19 have ranged from 2% to 8% [5], while deaths from overall infections have been estimated at 0.2% to 1.6%. Also, estimates for the proportion of deaths in the oldest age group, the over-80s, have been estimated to be between 8% to 36%. However, these past estimates had not adjusted for the fact that only people with more severe symptoms are likely to be tested, or people in quarantine following repatriation to other countries, so they did not reflect the true number of cases across populations. No previous studies have estimated the proportion of infections that will require hospitalisation.

For the current analysis, a team of international researchers used 3,665 cases from mainland China to estimate the proportion of cases likely to be severe enough to require hospitalisation. To estimate the average time between a person displaying symptoms and dying, they analysed 24 deaths in Hubei Province. The average recovery time was estimated using data from 2,010 international cases, of whom 169 people recovered. Death rates from confirmed cases were estimated using data on 44,672 cases in mainland China [2]. To estimate death rates relevant to the wider population, data from 689 people repatriated from Wuhan to other countries and 3,711 people quarantined on board the cruise liner Diamond Princess were used.

For all the estimates, the researchers assumed that people of all ages are equally likely to become infected, which is consistent with previous studies on respiratory infections.

The hospitalisation rates were lower for younger age groups: 3.4% of people in their 30s are likely to be hospitalised (while the unadjusted number of severe cases was 124 out of 733 cases), whereas for people in their 20s the rate is likely to be 1.0% (49 out of 437 cases before adjustment). There was only one severe case out of 50 for those aged 10 to 19 and the hospitalisation rate is estimated at 0.04%, whereas none of the 13 cases analysed in the under-10s were severe.

The average time between the first recorded symptoms and death from COVID-19 was estimated to be 17.8 days. The authors note that as the data are from early in the epidemic, more people might die following a longer time lag. Recovering from the disease is estimated to take slightly longer, with patients being discharged from hospital after an average of 22.6 days.

Most people will recover, even from severe symptoms. Death rates from confirmed cases were estimated at 1.38% across all age groups (1,023 out of 44,672 cases in mainland China, with unreported severe cases likely to add to the total, requiring the ratio to be adjusted), but the estimates rise rapidly with age. For example, there were no deaths out of 416 confirmed cases in the under 10-year olds, whereas 13.4% of people aged 80 or above were estimated to die (208 out of 1,408 cases before adjustment). [5]

The proportion of all people infected who die from the disease--most of whom will display only mild to moderate symptoms--is estimated to be slightly lower, at 0.66%. Again, the risk of death is much higher in older age groups. For example, 0.031% of people in their 20s are estimated to die, compared with 7.8% of the over-80s.

The authors note that they are unable to adjust for the effect on prognosis of underlying health conditions until individual-level data become available. However, underlying conditions are likely to be correlated with age. Their existence will also vary geographically, particularly between low-income and high-income regions and countries.

Writing in a linked Comment, Dr Shigui Ruan (who was not involved in the study) from the University of Miami, USA, says: "Estimates of case fatality ratios might vary slightly from country to country because of differences in prevention, control, and mitigation policies implemented, and because the case fatality ratio is substantially affected by the preparedness and availability of health care. Early studies have shown that delaying the detection of infected cases not only increases the probability of spreading the virus to others (most likely family members, colleagues, and friends) but also makes the infection worse in some cases, thereby increasing the case fatality ratio."

This study was funded by the UK Medical Research Council. It was conducted by researchers from Imperial College London, Queen Mary University London and the University of Oxford.

[2] Estimated proportions of confirmed cases that will die were based on 70,117 laboratory-confirmed and clinically-diagnosed cases in mainland China from 1 January to 11 February 2020, with values adjusted for demography and undetected symptomatic cases, while crude death rates were based on the 44,672 laboratory confirmed cases. 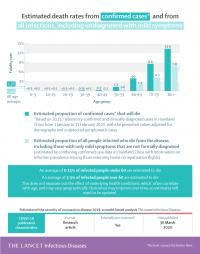