PULLMAN, Wash.--For a mammal's sperm to succeed, it must complete the swim of its life to reach and fertilize an egg. That's easier if it swims through water, not goo.

It turns out that both the male and female have a role in making that happen.

A Washington State University researcher has found that the uterus in female mice contains enzymes that can break down semen, making it less gel-like, more watery, and therefore easier to swim in. Scientists have previously thought semen is broken down by enzymes from the prostate gland.

But writing this week in the journal PLOS Genetics, Wipawee Winuthayanon, an assistant professor in WSU's School of Molecular Biosciences, reports that female mice also produce the enzyme, using estrogen to induce the process. They also saw that when a female mouse lacked a gene to make this happen, semen failed to liquefy in its uterus.

"Our studies provide the first evidence of how the interplay between semen and the female reproductive tract could impact fertility," the researchers write.

The study highlights an underappreciated complication in the physical changes that semen undergoes and the relative roles of secretions in both the male and female reproductive tracts.

"This information will advance research on semen liquefaction in the female reproductive tract, an area that has never been explored," said the researchers, "and could lead to the development of diagnostic tools for unexplained infertility cases and non-invasive contraception technologies."

Fertility can hinge on swimming conditions in the uterus 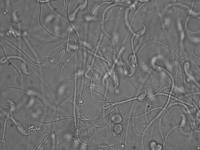