Dark matter was first proposed by the Swiss astronomer Fritz Zwicky in the 1930s. He found that clusters of galaxies were filled with a mysterious dark matter that kept them from flying apart. At nearly the same time, Jan Oort in the Netherlands discovered that the density of matter near the Sun was nearly twice what could be explained by the presence of stars and gas alone. In the intervening decades, astronomers developed a theory of dark matter and structure formation that explains the properties of clusters and galaxies in the Universe, but the amount of dark matter in the solar neighbourhood has remained more mysterious. For decades after Oort's measurement, studies found 3-6 times more dark matter than expected. Then last year new data and a new method claimed far less than expected. The community was left puzzled, generally believing that the observations and analyses simply weren't sensitive enough to perform a reliable measurement.

Testing the method on a simulated Milky Way

Now an international team, lead by researchers of the University of Zürich with the participation of the ETH Zürich, have developed a new technique. The researchers used a state-of-the-art simulation of the Milky Way to test their mass-measuring method before applying it to real data. This threw up a number of surprises: they noticed that standard techniques used over the past twenty years were biased, always tending to underestimate the amount of dark matter. The researchers then developed a new unbiased technique that recovered the correct answer from the simulated data. Applying their technique to the positions and velocities of thousands of orange K dwarf stars near the Sun, they obtained a new measure of the local dark matter density.

Evidence for dark matter near the sun

"We are 99% confident that there is dark matter near the Sun," says the lead author Silvia Garbari. In fact, if anything, the authors' favoured dark matter density is a little high: they find more dark matter than expected at 90% confidence. There is a 10% chance that this is merely a statistical fluke, but if future data confirms this high value the implications are exciting as Silvia explains: "This could be the first evidence for a "disc" of dark matter in our Galaxy, as recently predicted by theory and numerical simulations of galaxy formation, or it could mean that the dark matter halo of our galaxy is squashed, boosting the local dark matter density."

Many physicists are placing their bets on dark matter being a new fundamental particle that interacts only very weakly with normal matter, but strongly enough to be detected in experiments deep underground. An accurate measure of the local dark matter density is vital for such experiments as co-author Prof. George Lake explains: "If dark matter is a fundamental particle, billions of these particles will have passed through your body by the time your finish reading this article. Experimental physicists hope to capture just a few of these particles each year in experiments like XENON and CDMS currently in operation. Knowing the local properties of dark matter is the key to revealing just what kind of particle it consists of."

Plenty of dark matter near the Sun 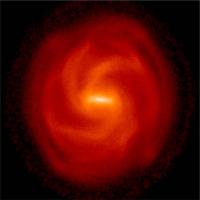 Evidence for Dark Matter near the Sun