CORVALLIS, Ore. - A recalculation of the dates at which boulders were uncovered by melting glaciers at the end of the last Ice Age has conclusively shown that the glacial retreat was due to rising levels of carbon dioxide and other greenhouse gases, as opposed to other types of forces.

Carbon dioxide levels are now significantly higher than they were at that time, as a result of the Industrial Revolution and other human activities since then. Because of that, the study confirms predictions of future glacial retreat, and that most of the world's glaciers may disappear in the next few centuries.

The findings were published today in Nature Communications by researchers from Oregon State University, Boston College and other institutions. They erase some of the uncertainties about glacial melting that had been due to a misinterpretation of data from some of these boulders, which were exposed to the atmosphere more than 11,500 years ago.

"This shows that at the end of the last Ice Age, it was only the increase in carbon dioxide and other greenhouse gases that could have caused the loss of glaciers around the world at the same time," said Peter Clark, a professor in the OSU College of Earth, Ocean and Atmospheric Sciences, and co-author on the study.

"This study validates predictions that future glacial loss will occur due to the ongoing increase in greenhouse gas levels from human activities," Clark said. "We could lose 80-90 percent of the world's glaciers in the next several centuries if greenhouse gases continue to rise at the current rate."

Glacial loss in the future will contribute to rising sea levels and, in some cases, have impacts on local water supplies.

The new findings, Clark said, were based on a recalculation of the ages at which more than 1,100 glacial boulders from 159 glacial moraines around the world were exposed to the atmosphere after being buried for thousands of years under ice.

The exposure of the boulders to cosmic rays produced cosmogenic nuclides, which had been previously measured and used to date the event. But advances have been made in how to calibrate ages based on that data. Based on the new calculations, the rise in carbon dioxide levels - determined from ancient ice cores -matches up nicely with the time at which glacial retreat took place.

"There had been a long-standing mystery about why these boulders were uncovered at the time they were, because it didn't properly match the increase in greenhouse gases," said Jeremy Shakun, a professor at Boston College and lead author on the study. "We found that the previous ages assigned to this event were inaccurate. The data now show that as soon as the greenhouse gas levels began to rise, the glaciers began to melt and retreat."

There are other forces that can also cause glacial melting on a local or regional scale, the researchers noted, such as changes in the Earth's orbit around the sun, or shifts in ocean heat distribution. These factors probably did have localized effects. But the scientists determined that only the change in greenhouse gas levels could have explained the broader global retreat of glaciers all at the same time.

In the study of climate change, glaciers have always been of considerable interest, because their long-term behavior is a more reliable barometer that helps sort out the ups-and-downs caused by year-to-year weather variability, including short-term shifts in temperature and precipitation. 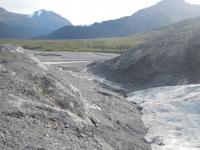