Since female mammals are born with a limited number of egg cells, most of the egg cells wait in a dormant state before maturing later in life to ensure a long period of fertility. However, how this dormant state is achieved and then maintained is still largely shrouded in mystery.

Researchers at Kyushu University's Department of Stem Cell Biology and Medicine have now uncovered several conditions necessary for creating this supply of dormant egg cells in mice, providing useful insight for the further understanding and development of reproductive biology and medicine.

The work, which span two papers, investigates the problem from two different angles: the creation of dormant egg cells from mouse stem cells and the maintenance of the dormant state in ovaries from mice.

While scientists studying mice have been able to create egg cells from stem cells, the egg cells created in the laboratory begin maturing after quickly passing through the dormant state, and the conditions to initially induce a longer-lasting dormant state have been unclear.

"The environment in nature and in the lab is vastly different, so we have been searching for how to recreate the necessary conditions in the lab to obtain the same growth process found in nature," says So Shimamoto, the first author on the Proceedings of the National Academy of Sciences of the United States of America paper reporting the results.

By limiting the oxygen reaching the egg cells in the lab while at the same time increasing the amount of FOXO3, the researchers obtained egg cells very similar to those in the dormant state from live mice.

"This is the closest so far that egg cells developed from stem cells in the lab have come to resembling those found in nature," comments Katsuhiko Hayashi, head of the group leading the two studies.

At the same time, the researchers have also been investigating how this dormant state is maintained by transplanting mouse ovaries at various stages of development into adult mice and comparing differences between ovaries that retained their dormant egg cells to those that did not.

In this case, they found that egg cells that remained in the dormant state where surrounded by a denser extracellular matrix--the network of molecules between cells--that could be mechanically compressing the dormant egg cells.

"While these observations supported our initial idea of pressure being a factor, we were surprised to find that the nuclei of some of the egg cells were also rotating when observed under the microscope," explains Go Nagamatsu, lead author on the paper reporting these latter results in Science Advances.

"By pursuing multiple approaches, we are making progress in better understanding this critical aspect of reproduction, but these results show that many factors come into play and that we may still just be scratching the surface," says Hayashi.

"We hope that the knowledge gained through this and continued research will contribute to developments in reproductive medicine in the future."

For more information about this research, see the following papers. 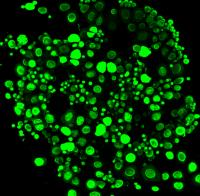