"We're not driving the additive manufacturing train, industry is," said Ted Swanson, the assistant chief for technology for the Mechanical Systems Division at NASA's Goddard Space Flight Center in Greenbelt, Md. Swanson is the center's point-of-contact for additive manufacturing. "But NASA has the ability to get on-board to leverage it for our unique needs."

Led by NASA's Space Technology Mission Direc­torate, the agency has launched a number of formal programs to prototype new tools for current and future missions using this emerging manufacturing technique. Additive manufacturing involves computer-aided device, or CAD, models and sophisticated printers that literally deposit successive layers of metal, plastic or some other material until they are complete.

In addition to the U.S. Air Force, DOE, NIST and NSF, NASA is part of the government team investing in, America Makes, formerly known as the National Additive Manufacturing Innovation Insti­tute, a public-private partnership created to transition this exciting technology into mainstream U.S. manufacturing.

America Makes is part of the National Manufacturing Initiative, a forward-leaning effort that recognizes our economy requires an advanced, globally competitive manufacturing sector that invents and makes high-value-added products and leading-edge technologies here in the U.S.

As a result of these efforts and others sponsored around the agency, teams of NASA engineers and scientists are investigating how their instruments and missions might benefit from an industry that actually began more than two decades ago, with the introduction of the world's first 3-D system.

"This effort really goes beyond one center," said Matt Showalter, who is overseeing Goddard's disparate 3-D printing efforts. Showalter believes God­dard technologists and scientists will benefit most from collaborations with others also investigating the technology's benefits. "It's in the national inter­est to collaborate with other institutions. This is a powerful tool and we need to look at how we can implement it. For us, it's a team effort."

A majority of NASA centers have begun applying the technology to a number of applications pertinent to their areas of expertise.

Goddard, for example, is devoting R&D resources to evaluate the usefulness of 3-D printing for a variety of instru­ment-development efforts. NASA's Langley Research Center, in Hampton, Va., has developed a green-manufacturing process, called the Electron Beam Freeform, or EBF3. It uses an electron-beam gun, a dual-wire feed, and computer controls to remotely manufacture metallic structures for build­ing parts or tools in hours, rather than days or weeks.

NASA's Kennedy Space Center in Florida is investigating the use of in-situ regolith, or soil, on extrater­restrial bodies as feedstock for building 3-D habitats and other structures. NASA's Ames Research Center in California's Silicon Valley is explor­ing the application of synthetic biology for the manufactur­ing of biological ma­terials — everything from construction materials to foodstuffs — from small stocks of cells. NASA's Glenn Research Center in Cleveland recently collaborated with Aerojet Rocketdyne of West Palm Beach, Fla., to fabricate and successfully test an engine injector for the RL-10 rocket.

In addition, NASA's Marshall Space Flight Center in Huntsville, Ala. has used 3-D printing to create components for the J-2X and RS-25 rocket engines. The center also is work­ing with Made In Space, a Silicon Valley start-up, to develop a 3-D printer that astronauts will use on the International Space Station later this year. The idea is that astro­nauts will create tools and replacement parts they need to operate in space, eliminating the need to transport these items there. The team plans to fly the device on the International Space Station in October 2014. 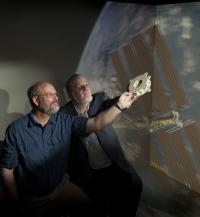