Shallow lakes in agricultural landscapes will emit significantly greater amounts of methane, mostly in the form of bubbles (ebullition) in a warmer world, which is a potential positive feedback mechanism to climate warming.

Submerged plants are key predictors of methane ebullition. The combination of warming with the loss of plants appears to transform shallow lakes into methane bubbling machines.

These are the main findings of a study published today in Nature Climate Change led by senior researcher Thomas A. Davidson, from the Lake group, Department of Bioscience and Arctic Research Centre, Aarhus University, Denmark.

Shallow lakes are increasingly recognised as playing an important role in global greenhouse gas cycling. Given the number of shallow lakes globally they potentially have a large influence on atmospheric methane concentrations, which continue to rise.

Methane is released from lakes in a number of ways, both by diffusion of dissolved gas and by bubbles released from the sediments, also called ebullition.

Ebullition is not constant, but happens in episodes of bubble release, so is hard to measure accurately. As a result it is not clear how much methane is released as bubbles from lakes, nor are we sure how it will respond to the combination of climate change and nutrient enrichment.

The present study used the longest running freshwater mesocosm climate change experiment in the world to investigate how warming and eutrophication might interact to change methane ebullition in the future.

The results here were striking as they showed that the combination of increased nutrient loading and warming had a synergistic effect on the ebullition of methane. In the absence of nutrient enrichment, warming alone increased annual methane ebullition by around 50% and its relative contribution to total methane emission rose from about 50% to 75%.

In stark contrast to this, when nutrient levels were high, warming increased total methane emission by at least six fold and in some cases 17 fold, and the proportion of ebullition increased to 95% of total annual methane flux (See Figure).

Nutrient enrichment, or eutrophication, is the most common human impact on fresh waters, with all lakes in agricultural landscapes likely to be impacted.

A feature of eutrophication in shallow lakes is the loss of biodiversity and the replacement of submerged plants by phytoplankton as the dominant primary producer.

This suggests that through careful management of agricultural landscapes and fresh waters ensuring the proliferation of submerged plants, ebullition of methane can be minimised and in addition ecological condition and fresh water biodiversity will benefit. 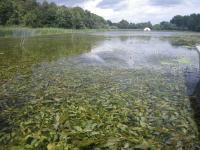 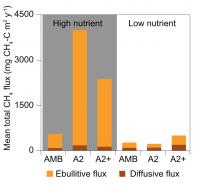