DURHAM, N.C. -- Gamma and neutron imaging offer possible improvements over existing techniques such as X-ray or CT, but their safety is not yet fully understood. Using computer simulations, imaging the liver and breast with gamma or neutron radiation was found to be safe, delivering levels of radiation on par with conventional medical imaging, according to researchers at Duke Medicine.

The findings, published in the June issue of the journal Medical Physics, will help researchers to move testing of gamma and neutron imaging into animals and later humans.

Conventional medical imaging tools – including X-ray, ultrasound, CT and MRI – detect disease by finding the anatomy, or shape and size, of the abnormality. When using these tools to screen for cancer, a tumor must be large enough to be detected, and if found, a surgical biopsy is generally required to determine if it is benign or malignant.

Duke researchers are working to develop imaging technologies to detect disease in its earliest stages, much before the tumors grow large enough to be detected using conventional methods. Two imaging techniques they are researching are Neutron Stimulated Emission Computed Tomography and Gamma Stimulated Emission Computed Tomography.

Research has shown that many tumors have an out-of-balance concentration of trace-level elements naturally found in the body, such as aluminum and rubidium. These elements stray from their normal concentration levels at the earliest stages of tumor growth, potentially providing an early signal of disease.

The neutron and gamma imaging methods measure the concentrations of elements in the body, determining molecular properties without the need for a biopsy or injection of contrast media. The goal is for these tests to be able to distinguish between benign and malignant lesions, as well as healthy tissue.

"Gamma and neutron imaging may eventually be able to help us to detect cancer earlier without having to perform an invasive biopsy," said Anuj Kapadia, Ph.D., assistant professor of radiology at Duke University School of Medicine and the study's senior author.

While improved diagnostic tests would provide clinicians with useful tools, one ongoing question is the safety of gamma and particularly neutron radiation. Upon entering the body, neutrons scatter considerably, with the possibility of reaching several vital organs. Thus, researchers have been concerned about how much radiation is absorbed in the targeted organ versus surrounding tissue. For instance, in a breast scan, how much radiation is delivered unnecessarily to the heart or lungs?

When imaging the liver in simulation, the neutron scan imparted the highest radiation dose to the liver, while in the gamma scan, the stomach wall absorbed the greatest amount of radiation given its location in the direct path of the beam. Further work is needed to reduce and better target gamma radiation doses in liver scans.

"The results show that despite the use of a highly scattering particle such as a neutron, the dose from neutron imaging is on par with other clinical imaging techniques such as X-ray CT," Kapadia said. "Neutron and gamma radiation may become viable imaging alternatives if further testing proves them to be safe and effective."

The researchers will use this information to move their studies into animals, and later, humans.

In addition to Kapadia, authors include Matthew D. Belley and William Paul Segars of Duke. The study was supported by the National Institutes of Health (R01-EB001838, T32-EB007185). 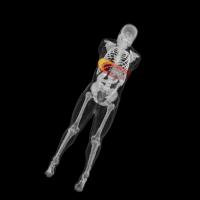 Simulated 3-D Dose Measurements of the Breast (2 of 2)