A U.S. Army researcher has scored a patent for inventing a new tool for training dogs to detect chemical compounds.

Hughes' method streamlines the training process for detection dogs while preventing contamination that can throw off dogs' sense of smell by using a training aid that delivers "customizable emissions rates" and "consistent odor profiles."

Currently, canines are trained by exposing them to substances measured by mass, with the amount reduced or increased to vary the animal's "dynamic range," or ability to detect the material. However, according to Hughes, this method is imperfect as it fails to account for the diffusion differences of varying substances, as well as the potential contamination the substance will have coming into contact with other odors.

The end result is, as Hughes' notes in the patent issued to the Army on December 3, "canine trainers and handlers are often unaware as to the quantity of odor they are presenting to their dog."

To remedy this, Hughes' invention consists of a series of precise stainless steel capillary tubes of varying lengths and diameters.

The tubes diffuse a specific amount of odor into the air, beginning with larger amounts to get the animal used to the smell, and slowly -- using smaller tube diffusers -- introducing less and less in order to sharpen the dog's sensitivity.

For example, once a canine can reliably detect a 10 ng/min tube, the trainer may elect to begin using a 1 ng/min tube to improve the canine's sensitivity to the target chemical."

TechLink, the Army's partnership intermediary for technology transfer, is helping innovative companies identify the opportunity for commercializing the invention.

Marti Elder, senior technology manager at TechLink, encouraged businesses to license the patent and potentially work with Hughes to develop it further for law enforcement or other commercial purposes.

"There's something beautiful about an invention that simplifies and streamlines a complex task such as training detection dogs," Elder said. "This patent represents a way forward for improved safety and threat detection and prevention in both the military and law enforcement sectors and we are excited to help any interested business license the rights."

Business inquiries can be sent to Marti Elder at marti.elder@techlinkcenter.org or reach her by telephone at 406-586-7621. 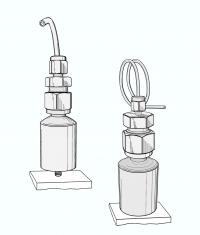 Illustration of the Army Training Aid