Aircrafts have to be more efficient – a crucial point when it comes to the design of jet engines. However, in the design of the components, the engineers also need to consider whether these can be economically produced. Yet, a new process chain provides more design freedom and allows a more efficient production as well as repair processes. At the ILA Berlin Air Show from May 20 to 25, Fraunhofer researchers from Aachen, Germany will be presenting several components that have been produced or repaired with the help of this new technology (Hall 6, Stand 6212).

According to forecasts, air traffic will continue to increase in the future. In order to avoid an excessive pollution aircrafts will have to fly with less fuel und less emissions. Their production should also save material and time resources.

In the design of engine components, the engineers previously had to be especially sure that new components could be produced. The motto was: "Design for Manufacture". "We can now turn this paradigm around and, instead of 'Design for Manufacture', we can offer 'Manufacture for Design'," says Dr. Ingomar Kelbassa, head of department at the Fraunhofer Institute for Laser Technology ILT. This means that the scientists can produce components that previously could not be manufactured. This is possible, for instance, with Selective Laser Melting (SLM). Step by step laser radiation is scanned across a powder bed and traces out the form of the component within this specific layer. Wherever the laser radiation impacts the powder, the powder initially melts and then solidifies to form a solid mass. In this way, the component is built-up layer by layer. Until now, the parts were subtractively produced by e.g. milling. This involved a great loss of material, of course, and there are geometric restrictions in the production of certain geometries.

The researchers are now working with their colleagues from the Fraunhofer Institute for Production Technology IPT on the integration the Additive Manufacture AM into an entire, continuous process chain. To illustrate what the new process chain can achieve, they have produced a Nozzle Guide Vane (NGV) cluster that consists out of six double vanes. Previously, the vanes for turbines could only be produced in pairs, as twin blades. Now, they can be installed much more easily and quickly. The experts have also improved the base of the NGV cluster, that they will be showcasing at the trade show: This was previously massive in terms of manufacturing, but for the first time, a honeycomb structure is now feasible from the design and manufacturable from the production point of view. The entire component will be about 30 percent lighter as a result. "We combine subtractive, subsequent milling with additive SLM," explains Dr. Thomas Bergs, Managing Chief Engineer at the IPT. The researchers first compare how powerful the individual processes are, and then, whether they offer more design freedom – and thus more opportunities to increase the efficiency of the engine, significantly.

The research is a subproject of the Cluster of Innovation AdaM, short for "Adaptive production for Resource Efficiency in Energy and Mobility": This is where the Fraunhofer Institutes IPT and ILT as well as 21 industrial partners pool their skills. The goal is to technically implement new concepts for turbo machinery – for engines, among other things – so that they can convert energy more efficiently. Furthermore, CO2 emissions are reduced and resources conserved.

Repair is part of the life cycle, too

If one considers the life-cycle of, for instance, a turbine blade, at some point, it's time for repairs. In the Cluster of Innovation AdaM, the researchers have also considered the Maintenance, Repair and Overhaul (MRO) of engine blades: While the technicians previously had to repair these blades manually, the process is now fully automated. "We do not even need halfe the processing time. And more importantly, the method is reproducible and ensures high-quality repairs," says Bergs.

An important step toward automation was the development of the "CAx framework": This software approach allows all the various repair technologies to be operated from a single platform. "CA" stands for computer aided, "x" for the individual technologies of the production. Firstly, the geometric data of damaged or worn-out blade is acquired by e.g. digitizing. Secondly, a milling machine blends out the defect and thirdly,laser radiation builds-up the blade again layer by layer via Laser Material Deposition (LMD). The researchers have already implemented this method for gas turbines; now, they can also transfer it to engine blades.

At the ILA trade show, the researchers show both a repaired helicopter blade that is approximately six inches wide, as well as the three-meter-long blade of a Transall aircraft. Additionally, they present a new manufacturing method for blade integrated disks (blisks): This involves heavy-duty compressor stages, of which the individual blades have been milled out of one piece (Milled from Solid – MfS). The result is aerodynamically improved and lighter. 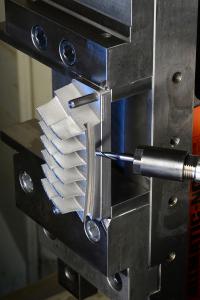