Researchers at University of California San Diego School of Medicine, with national collaborators, have identified a series of molecular clues to understanding the formation of cerebral cavernous malformations (CCMs). The study offers the first genome-wide analysis of the transcriptome of brain microvascular endothelial cells after KRIT1 inactivation. Findings were published September 28 in the Journal of Experimental Medicine.

"These mouse studies reveal a critical mechanism in the pathogenesis of cerebral cavernous malformations and point to the possibility of using angiogenesis inhibitors, such as TSP1 for potential therapy," said Mark H. Ginsberg, MD, professor of medicine, UC San Diego School of Medicine.

CCMs are collections of enlarged and irregular blood vessels in the central nervous system (CNS), for which there is no drug therapy. The vessels are prone to leakage causing headaches, seizures, paralysis, hearing or vision loss, or bleeding in the brain. There are two forms of the condition: familial and sporadic, affecting 1 in 200 patients in the U.S. The current treatment for CCMs involves invasive surgery, however, surgery is not possible for all patients due to location of vascular lesions within the CNS.

The most common cause of familial cavernous malformations is mutations of KRIT1. The protein produced from this gene is found in the junctions connecting neighboring blood vessel cells. Loss of function mutations in KRIT1 result in weakened contacts between blood vessel cells and CNS vascular abnormalities as seen in CCMs.

"Inactivation of KRIT1 in endothelial cells causes a cascade of changes in the expression of genes that regulate cardiovascular development," said Ginsberg. "What we learned is that reduced expression of a protein encoded by one of these genes, TSP1, contributes to the growth of CCMs. Loss of one or two copies of THBS1, the gene that encodes TSP1, makes a mouse model of the disease much worse. Conversely, administration of 3TSR, a fragment of TSP1, reduces lesions in this mouse model. This means that replacement of TSP1 by 3TSR or other angiogenesis inhibitors may be a preventative for CCMs or treatment of the disease."

"Moreover, anti-angiogenic based therapy can function as a natural means to treat CCMs in the sense that it would replace the function of a protein that is lost as a consequence of the pathogenesis of CCM disease," said first author Miguel Alejandro Lopez-Ramirez, PhD, senior research associate, UC San Diego School of Medicine. "We thus suggest that TSP1 functional replacement could provide a more 'biological' therapy for CCMs." 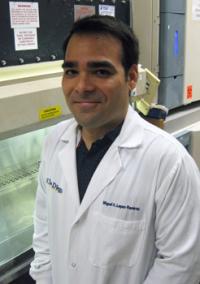