The wear and tear of life takes a cumulative toll on our bodies. Our organs gradually stiffen through fibrosis, which is a process that deposits tough collagen in our body tissue. Fibrosis happens little by little, each time we experience illness or injury. Eventually, this causes our health to decline.

"As we age, we typically accumulate more fibrosis and our organs become dysfunctional," says Denisa Wagner, PhD, the Edwin Cohn Professor of Pediatrics in the Program in Cellular and Molecular Medicine and a member of the Division of Hematology/Oncology at Boston Children's Hospital and Harvard Medical School.

Ironically, fibrosis can stem from our own immune system's attempt to defend us during injury, stress-related illness, environmental factors and even common infections.

But a Boston Children's team of scientists thinks preventative therapies could be on the horizon. A study by Wagner and her team, published recently by the Journal of Experimental Medicine, pinpoints a gene responsible for fibrosis and identifies some possible therapeutic solutions.

"We've documented in mice how deletion of a single gene, PAD4, has a drastic effect on curbing the complex process of fibrosis," says Kim Martinod, PhD, a former postdoctoral fellow and co-lead author on the study with Thilo Witsch, MD, and Luise Erpenbeck, MD, in Wagner's lab.

Their research indicates that an already-FDA-approved drug used by cystic fibrosis patients could shield our organs from fibrosis during acute events, like lung infection or heart attack. And looking to the future, they envision that the development of a once-daily pill, capable of inhibiting PAD4, could one day be used as a preventative measure.

The PAD4 gene controls an enzyme of the same name. In times of infection or bodily stress, the PAD4 enzyme activates a strange, primitive immune defense that ends up doing more harm than good. White blood cells, called neutrophils, self-combust and eject their own DNA strands outward like javelins. Sacrificing themselves, the exploded neutrophils and their outreaching DNA tentacles form so-called neutrophil extracellular traps (NETs), which nature perhaps intended to use as webs for catching foreign invaders and plugging up injury-related bleeding.

Even though NETs try to help us, they counteractively set off a chain reaction that deposits an insidious type of collagen amidst our organs' hard-working cells. This collagen-laced fibrosis keeps piling up each time our body's immune system releases NETs. Over a lifetime, cumulative fibrosis is a far more important factor in health than any possible benefits imparted by NET release.

Whereas young hearts in mice and humans contain thin layers of connective tissue, older hearts typically have too much connective collagen built up between heart muscle cells. This reduces the heart's ability to pump blood efficiently.

To investigate PAD4's effects on age-related cardiac fibrosis, Wagner's team compared heart tissue of normal mice with another group of mice that had the PAD4 gene deleted. They observed that old mice without PAD4 had much less fibrosis than the normal mice. In fact, these mice had heart tissue that looked strikingly similar to heart tissue of young mice, and they kept up remarkably "young" levels of systolic and diastolic heart function as they aged.

The researchers believe these observations show that deleting the PAD4 gene in mice protected their organs from age-related fibrosis and dysfunction.

"If we could inhibit PAD4 or otherwise stop NET release in humans, we might be able to greatly reduce age-related fibrosis and improve our quality of life," says Wagner.

For starters, it turns out there's already a drug on the market that can degrade NETs after they've been released. It works by targeting the expelled strands of DNA that characterize NETs.

The DNA-destroying enzyme DNase has been developed into a drug used today by cystic fibrosis (CF) patients. CF makes the body's fluid secretions very thick, causing mucus accumulation and frequent lung infection. In the face of the ensuing infection, PAD4 activates prolific NET release in CF patients' lungs. Together with bacteria, this forms a gel-like layer of debris that further debilitates the lungs.

To combat this gel, CF patients turn to an inhalable drug form of DNase.

"NETs are easily targeted and destroyed by DNase in the lungs of CF patients," says Wagner. "So by extending DNase use to a much wider range of patients experiencing infectious illness or injury, we could potentially clear up NETs elsewhere in the body and prevent subsequent organ fibrosis."

Wagner's team tested this approach in an experimental model of mice with cardiac injury leading to heart failure, which activates the PAD4 enzyme and triggers NET release. Within one month, fibrosis and decline in heart function will typically follow.

Interestingly, mice that received DNase injections in the next few days after cardiac injury were protected from fibrosis nearly as well as mice that had their PAD4 gene deleted (and therefore never experienced NET release at all).

DNase might therefore be a powerful interventional therapy. It could potentially fight off accumulating organ fibrosis caused by a huge variety of infections or acute injuries.

To block NET release before it can even happen, Wagner and her team envision a PAD4 inhibitor drug that could stop neutrophils from being activated by the PAD4 enzyme.

"The development of orally-administered PAD4 inhibitors intended to be taken like baby aspirin could radically improve our quality of life as we age," Wagner speculates. 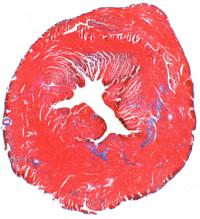