British people are at their least happy while at work - except when they are sick in bed - according to researchers at the University of Sussex and the London School of Economics (LSE).

The team analysed more than a million responses uploaded to a smartphone app, called Mappiness, that sporadically asks users questions such as how they are feeling, where they are and what they are doing.

Mappiness users receive a 'ding' on their smartphone at random times of the day, prompting them to complete a short survey, during which they rank their wellbeing using a sliding scale.

Tens of thousands of people have been using the app since 2010, helping to map happiness across the UK.

The researchers found that British people experience a 7-8 per cent drop in happiness while at work, compared to doing activities outside of work.

University of Sussex economist Dr George MacKerron, who created the app, says the immediacy of the technology offers great advantages.

He says: "Mappiness is interesting because it quizzes people in the moment, before they get a chance to reach for their rose-tinted glasses.

"For example, it is common to hear people say that they enjoy their work, but the Mappiness data show that people are happier doing almost anything other than working.

"Although we may be positive about our jobs when reflecting on the meaning and purpose they give us, and the money they provide, actually engaging in paid work comes at a significant psychological cost.

"It appears that work is highly negatively associated with momentary wellbeing: work really is disutility, as economists have traditionally assumed. At any given moment, we would rather be doing almost anything else."

The most pleasurable experience reported by app users is lovemaking or intimacy, followed by leisure activities, such as going to the theatre, visiting a museum or playing sport.

The data also debunks the myth that Brits love to queue - waiting or queueing is the fifth most unpopular activity.

The average user responded on around 60 separate occasions, allowing the researchers to build an accurate picture over time, compared to a single survey that can only really offer a momentary snapshot.

However, the researchers caution that, as might be expected from a smartphone-based study, the respondents were generally wealthier, younger and more likely to be employed or in full-time education than the UK population as a whole.

Dr MacKerron is based in the School of Business, Management and Economics at the University of Sussex. His research is focused on the economics of subjective wellbeing and the environment.

Misery of work second only to illness 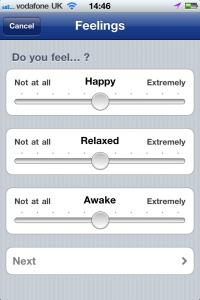