"We hope the wider neuroscience community will use it as a new standard reference atlas," says co-senior author Lydia Ng (@2queues) of the Allen Institute for Brain Science. "By making our atlas and related tools open access, new data and data types generated across our community can be more easily integrated and compared in the same spatial context, and the atlas in turn can be modified as our knowledge about brain structure evolves."

"Reference atlases are truly multi-purpose tools that are used for teaching neuroanatomy, providing common nomenclature to identify brain regions, supporting analyses to describe where data was collected, and representing our collective current knowledge on the organization of brain structure," says co-senior study author Julie Harris of the Allen Institute for Brain Science.

Historically, the development and refinement of brain atlases have co-evolved with advances in the field of neuroanatomy. Knowledge of mouse brain neuroanatomy has advanced dramatically over the past decade, with the advent of whole-brain mapping projects adding new data types and revealing cellular architecture in rich new detail.

"Modern digital reference atlases must evolve to stay current," Harris says. "Yet classic standard atlases do not meet the demands of these cellular-resolution datasets in 3D. So, we produced a truly 3D atlas to serve as a standard anatomical framework for the whole-brain datasets being produced."

"Given that each dataset reveals a unique labeling pattern for certain mouse brain regions, combining all these data types should complement or confirm each other, demonstrating a tremendous methodological advantage for accurately defining brain structures," Ng says.

The authors say that CCFv3 has higher spatial resolution than any currently existing 3D mouse brain reference space based on magnetic resonance imaging. Because CCFv3 is an average from a large population of mice, it can be used to study inter-individual variability in the volumes of 3D brain structures in the context of different disease states. In addition, many anatomical details were apparent in the average brain that were not readily discernable in any single mouse brain.

"We are now using this atlas as the common anatomical reference space for many large-scale projects, including whole-brain circuit mapping, single-cell reconstructions, and the generation of a comprehensive brain cell-type census," Harris says. "All these data, and what we learn about brain architecture in turn, will at some point necessitate an updated, next-generation 3D atlas, although it is likely to be constructed with different, more automated, data-driven methods."

This work was funded by the Allen Institute for Brain Science and in part by National Institutes of Health.

A virtual section of the 3D mouse brain atlas 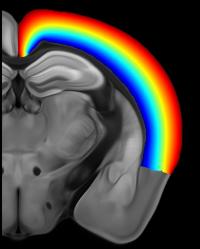