A recent study on the International Space Station brings to mind Aesop's fable of the Ant and the Grasshopper, and it is pretty amazing what we can learn from these industrious insects. The activities of a crew of ants that lived aboard the orbiting laboratory as part of the Ants in Space CSI-06 investigation are inspiring students and scientists alike. But the investigation has the potential to do far more than motivate; the data collected can teach us about algorithms related to the Internet and robotics.

Principal Investigator, Ecologist Deborah Gordon, conducts ant studies to provide insights into how ants answer collective search problems. Watching how the colony adapts as a unit in the quest for resources in extreme environments, like space, provides data that can be used to build algorithms with varied applications.

"This was an opportunity to see how ants solve the problem of collective search in microgravity," said Gordon. "Ants are very diverse ecologically, so they have many diverse search algorithms, and we know only a few of them. Understanding how ants search in different conditions could have applications for robotics."

Gordon had the idea to send her research subjects to space after studying ants in tropical forests, the desert, the hills around Silicon Valley, and even her kitchen. Now she can add microgravity to the diverse list of environments in which she's observed ants in an effort to better understand the communal behavior of the colony.

The study used the pavement ant (Tetramorium caespitum), common throughout most of the United States. The apparatus that housed the colony during its launch and time aboard the space station is called the Commercial Generic Bioprocessing Apparatus Science Insert (CSI).

Applied to robotic technology, ant-based algorithms may help in the development of cheaper, more efficient strategies for searching and exploration. The goal would be to operate missions with minimal information and no central control. This mimics ant colonies, which function without any leader, since queens serve only to reproduce, not to lead. Instead, ants communicate using their antennae to smell each other or chemical trails other colony members secrete to communicate with the collective workforce.

Researchers are now analyzing the Ants in Space data back on Earth. By studying how different species of ants have evolved to search their environments, Gordon points out that we could learn more about other systems like data networks and even our own brains. What these all have in common is a lack of central control. Instead, regulation takes place with simple reactions. In the case of ants using smell detected with the antennae, the rate of interactions is what regulates the behavior of the colony. Gordon points out that with ants, it's possible to watch the interactions as they happen, which is why they are ideal subjects for studying collective behavior.

"The search problem is how to manage the tradeoff between searching thoroughly and covering ground," said Gordon. "When they are more crowded, they can afford to be more thorough, because if one ant searches a small area thoroughly there will be another ant nearby to search over there. But when there are few ants in a large space, they have to stretch out their paths. An earlier experiment with Argentine ants showed that ants use interaction rate to assess density. In microgravity, the relation between how crowded they are, density, and interaction rate, might be messed up."

During a recent TED talk, Gordon commented on the initial image she saw of the ants during their time aboard the space station. "When I first saw this picture I thought, 'Oh no, they've mounted the habitat vertically.' But then I realized that of course it doesn't matter," said Gordon. "The idea here is that the ants are working so hard to hang on to the wall or the floor or whatever you call it, that they are less likely to interact and so the relationship of how crowded they are and how often they meet would change."

"The ants did execute search behaviors and occasionally, an ant lost her footing and tumbled about," confirmed Gregory Vogt, assistant professor with the Center for Educational Outreach at Baylor College of Medicine in Houston.

The Center for the Advancement of Science in Space (CASIS) and NASA facilitated the investigation, which is a collaboration between Gordon's team at Stanford University, The Center for Educational Outreach at the Baylor College of Medicine, and BioServe Space Technologies of the University of Colorado - Boulder.

While the researchers are analyzing data, they also are asking students to help add even more information by conducting their own ant studies of different species whose searching behavior has not been investigated yet. Teachers can download free guides and related images and videos to use with their students from the BioEd Online website and at the Gordon Lab website. The classrooms' findings add to a global map of potential search algorithms.

"We are setting up a program for kids around the world to try this so that we can discover new search algorithms in ant species that have never been studied," said Gordon.

"Student investigators will follow the plans in our guide to make ground control habitats," said Vogt. "They will plan their own investigations, collect data from their ants, and compare it to the images and videos of the ants on the space station...We will eventually collect investigation participation data."

Gordon has traced specific colonies of another species, harvester ants in the desert, for close to three decades, which is around the lifespan of a colony. By tracing the generations of the offspring colonies, she noted similar behavioral resemblances between parent and offspring colonies.

Gordon points out that these characteristics were not learned, so are apparently genetic in origin, underlying the ongoing evolution of colony behavior. The way that harvester ants regulate foraging is similar to an Internet protocol used to regulate data flow. The aptly named analogy--Anternet--compares the system in which a signal demonstrating there is sufficient bandwidth is necessary for data to leave a computer, just as an ant requires the input of its colony companions before leaving the nest to search for food. Knowledge of the algorithms that different species of ants use may actually lead to new algorithms for improved data networks.

With more than 14,000 species of ants, we can learn a great deal to apply to these search algorithms. With Gordon's goal of a global guide for ant strategies, it appears that there is much these ant-stronauts and their ground-based cousins can teach us.

All together now -- a lesson from Space Station 'ant-stronauts' 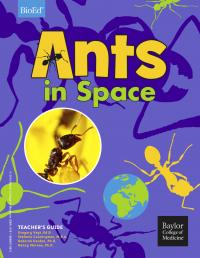