Surprisingly, there are still plant species waiting to be discovered in the Iberian Peninsula. Some are detected thanks to the latest study methods, and others, such as Linaria becerrae, are described when reinterpreting species which are already known. This new Málaga plant had been classified by mistake for 176 years.

The genus Linaria has about 150 species distributed throughout Europe, North Africa, and central and western Asia, but its main centre of diversity is in the Iberian Peninsula and the Maghreb. It is there that exclusive plants are found, discovered during the last two centuries, with very small distribution areas, sometimes threatened with extinction.

In Spain, in 1841, the Swiss botanist Pierre Edmond Boissier described the species Linaria salzmanii, which was named in honour of the botanist Philipp Salzmann who contributed to the knowledge of Iberian flora. Thanks to the material from Güéjar Sierra in Granada that Boissier analysed, it was determined that the plant was typical of sandy substrates, often dolomitic (rocky), and was found in the provinces of Granada, Málaga and Jaén.

But, in his visit to our country in 1837, the scientist never actually came to check the presence of the species near the town of El Chorro, in the western part of the province of Malaga, due to the likely existence of bandits. This has led to an error that lasted for almost two centuries.

Scientists from the universities of Granada and Almería have now carried out an exhaustive analysis of the populations of this species, and have observed that the plants found in Málaga differ significantly from those found in Granada: they have flowers with a long and straight spur, which are uniform in colour and intensely violet, except for a yellow spot at the entrance to the tube of the corolla (the area called the palate), with subtle violet veins.

"These and other considerations led our team to the description of the new species, Linaria becerrae. By mistake, it had previously been considered that the species described by Boissier was that of Málaga," explains Gabriel Gabrielto, one of the authors of the study published in Phytotaxa and a researcher at the University of Granada, to SINC

The plant has been named in honour of the botanist from Málaga, Manuel Becerra Parra, who had already recorded the differences between the Linaria species in the province of Malaga, and promoted this work.

A plant in need of protection

At present, the original population of Linaria salzmannii has disappeared due to the construction of the Canales dam, and Linaria becerrae is now considered exclusive of the west of the province of Málaga, where it lives in areas bordering the protected natural area of the Desfiladero de los Gaitanes, a well-known tourist site. The species forms communities of rapidly developing grasses in sandy substrates resulting from the decomposition of molasses (conglomerates and detrital sandstones).

"Although it is frequent in this area, the reach of this type of substrates is very small, so it should be part of the catalogue of protected species," suggests Blanca, for whom there are still species to be discovered not only by misinterpretations as in the case of this Málaga plant, but also for the detection of new organisms thanks to resolute methods of study.

The Spanish plant that was classified by mistake 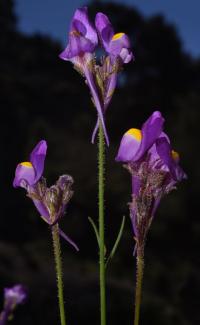 The Spanish Plant that Was Classified by Mistake