By dipping plain cotton cloth in a high-tech broth full of silver nanowires and carbon nanotubes, Stanford researchers have developed a new high-speed, low-cost filter that could easily be implemented to purify water in the developing world.

Instead of physically trapping bacteria as most existing filters do, the new filter lets them flow on through with the water. But by the time the pathogens have passed through, they have also passed on, because the device kills them with an electrical field that runs through the highly conductive "nano-coated" cotton.

In lab tests, over 98 percent of Escherichia coli bacteria that were exposed to 20 volts of electricity in the filter for several seconds were killed. Multiple layers of fabric were used to make the filter 2.5 inches thick.

"This really provides a new water treatment method to kill pathogens," said Yi Cui, an associate professor of materials science and engineering. "It can easily be used in remote areas where people don't have access to chemical treatments such as chlorine."

Cholera, typhoid and hepatitis are among the waterborne diseases that are a continuing problem in the developing world. Cui said the new filter could be used in water purification systems from cities to small villages.

Faster filtering by letting bacteria through

Filters that physically trap bacteria must have pore spaces small enough to keep the pathogens from slipping through, but that restricts the filters' flow rate.

Since the new filter doesn't trap bacteria, it can have much larger pores, allowing water to speed through at a more rapid rate.

"Our filter is about 80,000 times faster than filters that trap bacteria," Cui said. He is the senior author of a paper describing the research that will be published in an upcoming issue of Nano Letters. The paper is available online now.

The larger pore spaces in Cui's filter also keep it from getting clogged, which is a problem with filters that physically pull bacteria out of the water.

Cui's research group teamed with that of Sarah Heilshorn, an assistant professor of materials science and engineering, whose group brought its bioengineering expertise to bear on designing the filters.

Silver has long been known to have chemical properties that kill bacteria. "In the days before pasteurization and refrigeration, people would sometimes drop silver dollars into milk bottles to combat bacteria, or even swallow it," Heilshorn said.

Cui's group knew from previous projects that carbon nanotubes were good electrical conductors, so the researchers reasoned the two materials in concert would be effective against bacteria. "This approach really takes silver out of the folk remedy realm and into a high-tech setting, where it is much more effective," Heilshorn said.

Using the commonplace keeps costs down

But the scientists also wanted to design the filters to be as inexpensive as possible. The amount of silver used for the nanowires was so small the cost was negligible, Cui said. Still, they needed a foundation material that was "cheap, widely available and chemically and mechanically robust." So they went with ordinary woven cotton fabric.

To turn their discount store cotton into a filter, they dipped it into a solution of carbon nanotubes, let it dry, then dipped it into the silver nanowire solution. They also tried mixing both nanomaterials together and doing a single dunk, which also worked. They let the cotton soak for at least a few minutes, sometimes up to 20, but that was all it took.

"With a continuous structure along the length, you can move the electrons very efficiently and really make the filter very conducting," he said. "That means the filter requires less voltage."

The electrical current that helps do the killing is only a few milliamperes strong – barely enough to cause a tingling sensation in a person and easily supplied by a small solar panel or a couple 12-volt car batteries. The electrical current can also be generated from a stationary bicycle or by a hand-cranked device.

The low electricity requirement of the new filter is another advantage over those that physically filter bacteria, which use electric pumps to force water through their tiny pores. Those pumps take a lot of electricity to operate, Cui said.

In some of the lab tests of the nano-filter, the electricity needed to run current through the filter was only a fifth of what a filtration pump would have needed to filter a comparable amount of water.

The pores in the nano-filter are large enough that no pumping is needed – the force of gravity is enough to send the water speeding through.

Although the new filter is designed to let bacteria pass through, an added advantage of using the silver nanowire is that if any bacteria were to linger, the silver would likely kill it. This avoids biofouling, in which bacteria form a film on a filter. Biofouling is a common problem in filters that use small pores to filter out bacteria.

Cui said the electricity passing through the conducting filter may also be altering the pH of the water near the filter surface, which could add to its lethality toward the bacteria.

Cui said the next steps in the research are to try the filter on different types of bacteria and to run tests using several successive filters.

"With one filter, we can kill 98 percent of the bacteria," Cui said. "For drinking water, you don't want any live bacteria in the water, so we will have to use multiple filter stages."

David Schoen and Alia Schoen were both graduate students in Materials Science and Engineering when the water-filter research was conducted and are co–lead authors of the paper in Nano Letters. David Schoen is now a postdoctoral researcher at Stanford. 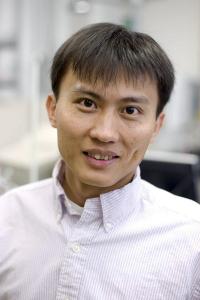