Arranging DNA fragments into a genome sequence that scientists can interpret is a challenge often compared to assembling a puzzle, except there is no box to provide an idea of what the picture is even supposed to be. Sometimes there's guidance in the form of other publicly-available DNA sequences from related organisms that can be used to guide the assembly process, but its usefulness depends on how closely related any two sequences are to one another. For example, a reference genome might be so distantly related from the one being assembled, it would be akin to comparing a Model-T to a contemporary hybrid car.

For researchers interested in switchgrass, a perennial grass that the U.S. Department of Energy (DOE) is investigating as a prospective biofuels feedstock, assembling the plant genome poses an even more complicated puzzle than usual because it has multiple copies of its chromosomes. The DOE Joint Genome Institute (JGI), in an international partnership that includes the DOE BioEnergy Science Center (BESC) and the DOE Joint BioEnergy Institute (JBEI), two of the three DOE Bioenergy Research Centers, has sequenced plant genomes of related candidate bioenergy crops such as sorghum and the model grass Brachypodium. Both plants have been used as references for switchgrass, however sorghum last shared a common ancestor with switchgrass more than 20 million years ago while Brachypodium last shared a common ancestor with switchgrass more than 50 million years ago. The genome of a much closer switchgrass relative—foxtail millet (Setaria italica)—is described in the May 13, 2012 edition of Nature Biotechnology. All three genomes, along with those of other plants sequenced by the DOE JGI are publicly accessible on www.phytozome.net.

"We're not thinking of Setaria as a biofuel crop per se but as a very informative model since its genome is so structurally close to switchgrass," said Jeff Bennetzen, a BESC researcher, the study's co-first author and a professor at the University of Georgia. He originally proposed that the DOE JGI sequence the foxtail millet genome under the 2008 Community Sequencing Program.

One of the challenges in studying grasses for bioenergy applications is that they typically have long lifecycles and complex genomes. Jeremy Schmutz, head of the DOE JGI Plant Program at the HudsonAlpha Institute of Biotechnology, pointed out that foxtail millet has several advantages as a model. It's a compact genome roughly half a billion bases in size, and large quantities of it can be grown in small spaces in just a few months.

Schmutz said that roughly 80 percent of the foxtail millet genome has been assembled using the tried-and-true Sanger sequencing platform, along with more than 95 percent of the gene space—the functional regions of the genome. "The Setaria genome is a high quality reference genome," he said. "If you want to conduct functional studies that require knowing all the genes and how they are localized relative to one another, then use this genome."

One such area of study is adaptation. Since it is found all over the world, Setaria is considered a good model for learning how grasses can adapt and thrive under various environmental conditions. Additionally it appears to have independently evolved a pathway for photosynthesis that is separate from that used by maize and sorghum. "With the sequencing of the Setaria genome," the team noted in their paper, "evolutionary geneticists now have an annual, temperate, C4, drought- and cold-tolerant grass that they can comprehensively compare to other plants that have or have not yet evolved these adaptions." C4 plants are distinguished by their ability to conduct photosynthesis faster than C3 plants under high light intensity and high temperatures.

Schmutz also noted that the Setaria genome is a good experimental model in the lab for studying switchgrass traits such as cell wall formation. As a member of BESC, Bennetzen explained how using the Setaria genome could aid one of his team's bioenergy projects: "The biggest cost and bottleneck in biofuel production is converting lignocellulose to simple sugars. We're looking at traits associated with reduced recalcitrance (i.e., easier access to sugars) and looking for variations that alter cell wall composition. If it works in Setaria then the same approach will work in switchgrass."

For Tom Brutnell, a co-author on the study and director of the Enterprise Institute for Renewable Fuels at the Donald Danforth Plant Center, the Setaria genome is the starting point for his own research interests. "Now that we have the genome sequence, we can kickstart the development of genetic tools for Setaria." His proposal under the DOE JGI's 2012 Community Sequencing Program builds off the availability of two Setaria genomes, that of foxtail millet and its wild ancestor green foxtail (S. viridis), which is also described in the paper. "What we really want is an Arabidopsis for the Panicoid grasses," he said, referring to the ubiquitous plant model used by many researchers. "Green foxtail is smaller than foxtail millet—we can get it to flower when it's just six inches tall and you go from seed to seed in six to eight weeks. In contrast, foxtail millet is a proper crop, so it's taller, has a longer generation time of four months, and no one has really developed efficient transformation methods for it. Our project with the DOE JGI allows us to tap the Setaria genomes to fast track S. viridis as a model genetic system."

Michael Freeling, a researcher at the University of California, Berkeley who works on plant comparative genomics, said that the Setaria genome "adds much to the power of 'grasses as a single genetic system' and the plant biology community is fortunate that DOE Joint Genome Institute has completed its draft sequence." He added that foxtail millet's location in the grass phylogenetic tree is crucial. "[It's] far enough away from rice to assure that functionless sequences have randomized, but not so far that small conserved regulatory sites are unrecognizable. Being in the sister tribe to the crops sorghum and maize, Setaria serves as a particularly valuable outgroup. Further, Setaria is nested into a region of grasses where C3 and C4 photosynthetic styles seem almost interchangeable, so insight is expected. C4 photosynthesis, with its distinctive anatomy including the famous bundle sheath, is particularly efficient. Setaria is now the model for all the other members of its tribe, including switchgrass."

"This work not only represents an important milestone in our goal to render the production of biofuels from lignocellulosic crops such as switchgrass more cost effective, but it also serves to illustrate how collaborations between centers such as BESC, JBEI and the JGI can significantly impact the frontiers of research for the whole plant research community," said BESC director Paul Gilna.

The DOE JGI Plant Program focuses on genomes that have been selected for their relevance to DOE missions in energy and environment, and leads the world in sequencing plants under this aegis. Aside from foxtail millet and switchgrass, other Plant Flagship genomes sequenced include, among others, poplar and soybean. Several of these Flagship genomes are also part of the Gene Atlas project, currently in its pilot phase. Designed to be a reference by which researchers can look up the gene information gathered under several standard experimental conditions, the Gene Atlas is projected to offer researchers a method of interpreting their data by comparing them against "normal" results for these plants. New public releases of these Flagship genomes and of other plant projects occur periodically, and the sequence and analysis is made public at www.phytozome.net.

BESC and JBEI are two of three DOE Bioenergy Research Centers established by the DOE's Office of Science in 2007. The centers support multidisciplinary, multi-institutional research teams pursuing the fundamental scientific breakthroughs needed to make production of cellulosic biofuels, or biofuels from nonfood plant fiber, cost-effective on a national scale. The centers are led by ORNL, Lawrence Berkeley National Laboratory and the University of Wisconsin-Madison in partnership with Michigan State University. 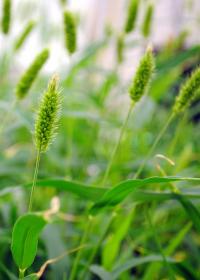