On Saturday, December 18, the IceCube Neutrino Observatory sank the last of 86 strings of sensitive photodetectors to a depth of almost two and a half kilometers in the ice at the South Pole, marking completion of the huge neutrino telescope.

"With the completion of IceCube, the 1970s dream of building a kilometer-scale neutrino detector has finally become a reality," says Francis Halzen, a professor of physics at the University of Wisconsin-Madison and the IceCube Collaboration's principal investigator. "Finally science can start with a stable instrument that already yields neutrinos with unprecedented energy and statistics."

Members of the IceCube Collaboration celebrated the event at the South Pole and around the world, at about 40 affiliated institutions located in the U.S., Germany, Belgium, Sweden, Barbados, Canada, Japan, New Zealand, Switzerland, and the United Kingdom. IceCube is supported largely by the National Science Foundation and led by the University of Wisconsin-Madison. The U.S. Department of Energy's Lawrence Berkeley National Laboratory has been a major contributor to the design and construction of its key components.

Under construction since 2004, IceCube encloses a cubic kilometer of clear ice, beginning one and a half kilometers beneath the surface and extending downward another kilometer. The telescope has to be this big because neutrino collisions with matter are exceedingly rare: out of uncounted trillions of neutrinos constantly passing through the ice, IceCube will observe just a few hundred a day.

Seeing them at all is only possible because when neutrinos collide with the nuclei of oxygen atoms in the ice, they turn into energetic charged particles called muons, moving in the same direction. Because these muons (and other debris from the collision) are moving faster than light can travel through ice, they radiate a shock wave of blue Cherenkov radiation visible to IceCube's photodetectors.

Digital Optical Modules were originally developed at Berkeley Lab. In 1997 two prototypes were built by the Jet Propulsion Laboratory and installed in the AMANDA array (IceCube's predecessor) at the South Pole. The University of Wisconsin, the lead institution in the AMANDA Collaboration, pioneered the hot-water drilling techniques that made deep-ice strings of sensors practical.

Berkeley Lab and the University of Wisconsin worked together with other institutions to design and build String 18, a single string of 40 prototype DOMs installed at AMANDA in 2000. Robert Stokstad and David Nygren of Berkeley Lab's Nuclear Science and Physics Divisions developed and championed the idea of digital optical modules and led the String 18 operation, with Physics Division engineer Jerry Przybylski doing much of the hardware work. Their superb performance resulted in the DOM technology being selected for IceCube.

Berkeley Lab's built-in electronics have performed with astonishing dependability. Ninety-eight percent of IceCube's over 5,000 DOMs are working perfectly, and another one percent are usable – reassuring numbers, given that the DOMs now frozen in the ice will never be seen again.

"The DOMs are no more accessible than a space satellite in high orbit," says Spencer Klein, Berkeley Lab's group leader for neutrino astronomy, "but they're a lot more reliable and extremely robust. They're also performing far above specifications, which called for them to be able to resolve the timing of Cherenkov radiation flashes within five nanoseconds" – five billionths of a second. "Instead, their timing resolution is about two nanoseconds."

To achieve this astonishing resolution the DOMs use integrated circuits, designed at Berkeley Lab, to sample the PMT signals 300 million times a second and convert each sample to a digital value. Commercial digitizer chips couldn't be used because of power limitations, since the fuel to power IceCube (and all work at the South Pole) must be flown in from 900 miles away on ski-equipped planes, and even the allotted five watts of power per DOM requires 10 planeloads of fuel a year.

In a lab on the surface of the ice, signals from DOMs on many different strings are combined into a single data stream, which is analyzed to determine the direction and energy of the neutrino events that left their tracks. For separating neutrino signals from far more copious background events, the most important discrimination is whether the signal comes from overhead or below. Muons moving upward through IceCube must come from neutrinos that have passed through the Earth. Downward-going muons produced when cosmic rays hit the ice are a million times more numerous.

A smaller background comes from neutrinos produced when cosmic rays hit Earth's atmosphere. To avoid this background, experimenters look for a cluster of neutrino events coming from a single direction in space, or for an excess of very energetic neutrinos; most atmospheric neutrinos are of lower energy.

A constant stream of results from the neutrino sky

Although IceCube has only now been fully deployed, scientific results have flowed from the project throughout its construction, including the overlap with AMANDA's research.

Significant achievements include a map of the entire neutrino sky, made from a single year of data using only half the full array, including tens of thousands of upward-going and downward-going neutrino events. The origins of these events are distributed randomly across the sky; the map reveals no hot spots but is still the most sensitive search for point sources of neutrinos yet made.

A more sensitive search for diffuse extra-terrestrial neutrinos looks at different "flavors" (types) of neutrinos, those associated with electrons, muons, or tau particles. When electron-type neutrinos interact in the Antarctic ice, they produce a compact shower of particles – almost a point source, when seen in IceCube. One advantage of looking for electron neutrinos is that the background from atmospheric neutrinos is much lower. Also, IceCube can measure their energy with precision. This kind of search calls for data-analysis techniques very different from those used elsewhere in IceCube. Joanna Kiryluk of Berkeley Lab's Nuclear Science Division has done such a search, and, not finding a clear signal, has set a limit on the number of cosmic electron neutrinos that can exist.

IceCube has also measured the energy spectrum of the muon-type neutrinos it has observed, from those with an energy of 100 billion electron volts up to 400 trillion electron volts. So far, the spectrum is consistent with neutrinos from cosmic-rays in the Earth's atmosphere. If an additional, unexpected component of very high-energy neutrinos were to be found, it might signal neutrinos of extraterrestrial origin.

IceCube has searched for neutrinos emitted at the same time as gamma-ray bursts – the most violent events in the universe, probably caused when a black hole collides with a neutron star or when a star 100 times as massive as our Sun collapses – and while no gamma-ray-burst neutrino source has been positively identified, the search has placed limits on the possible theoretical models of neutrino emission from these events.

One of the most interesting IceCube results so far is a limit on the possible accumulation of dark matter particles in the Sun. Based on data taken with the first 22 strings of DOMs, IceCube set a limit on the number of high-energy neutrinos that could be coming from the Sun. This in turn sets limits on the possible accumulation and subsequent annihilation of dark matter inside the Sun.

Dark matter is dark because it doesn't interact electromagnetically – the only force it must feel is gravity. Although many kinds of dark matter have been proposed, none have yet been found; particles called neutralinos are one likely possibility. As the lightest of the weakly interacting massive particles (so-called WIMPs), neutralinos would feel the weak nuclear force in addition to gravity, yet matter would be nearly transparent to them (as it would be to all proposed dark matter particles). Thus they could collect inside massive objects such as the Earth and the Sun. And because they are their own antiparticles, when they collide they annihilate and emit energetic neutrinos. But IceCube has seen no high-energy neutrinos coming from the Sun, which places stringent limits on the possible accumulation of neutralinos and some other kinds of dark matter there.

In 2009 the IceCube collaboration, originally designed for 80 strings of DOMs, decided to add an additional six strings to the center of the array. On these strings the DOMs are placed at seven-meter intervals, with the strings about 70 meters apart. This denser "infill" array, called DeepCore, will be able to detect neutrinos with energies below the reach of the main array and will extend IceCube's sensitivity to other kinds of dark matter. The new array will also allow researchers to study neutrino oscillation, measuring how neutrinos change flavors as they travel through the Earth.

IceCube is a unique observatory of the neutrino sky. It will study neutrinos created high in the atmosphere and search for neutrinos created in gamma-ray bursts, active galactic nuclei, the interaction of cosmic rays with the universe's background radiation, and the annihilation of dark matter particles.

Says Spencer Klein, "These physics results are just a taste of the things that we can expect from IceCube now that it is complete. After more than a decade of work, Berkeley Lab researchers can now fully enjoy the fruits of their labor, and are looking forward to a bountiful physics harvest."

Lawrence Berkeley National Laboratory is a U.S. Department of Energy national laboratory managed by the University of California for the DOE Office of Science. Berkeley Lab provides solutions to the world's most urgent scientific challenges, including sustainable energy, climate change, human health, and a better understanding of matter and force in the universe. It is a world leader in improving our lives through team science, advanced computing, and innovative technology. Visit our website at http://www.lbl.gov.

Into the ice: Completing the IceCube Neutrino Observatory 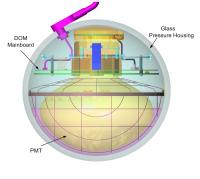 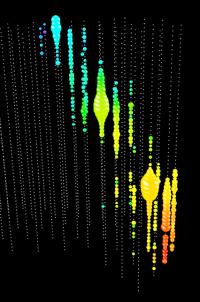