Toward the end of the last ice age, a major reorganization took place in the current system of the North Pacific with far-reaching implications for climate, according to a new study published in the July 9, 2010, issue of Science by an international team of scientists from Japan, Hawaii, and Belgium.

Earth's climate is regulated largely by the world ocean's density-driven circulation, which brings warm surface water to the polar regions and transports cold water away from there at depth. As poleward flowing salty waters cool in the North Atlantic, they become so heavy that they sink. This sinking acts as a pump for the ocean's conveyor belt circulation.

A well-established fact by now is that there have been times in the past when the North Atlantic branch of the conveyor belt circulation was shut down by melting ice sheets, which released so much fresh glacial meltwater that the sinking of cold water in the Nordic Seas stopped and the Northern Hemisphere was plunged into a deep freeze. The last time such a collapse took place was toward the end of the last ice age, from around 17,500 to 15,000 years ago, the first stage of what scientists call the Mystery Interval.

About that time, the North Pacific branch of the conveyor belt changed drastically, according to this study in Science. "The reconstructed changes in the North Pacific current system may have buffered the global impacts of the collapsed circulation in the Atlantic and possibly prevented further cooling of the Northern Hemisphere," says Axel Timmermann at the International Pacific Research Center, University of Hawaii at Manoa, and corresponding author of the paper.

"Around 17,000 years ago, the North Pacific surface waters grew saltier, and the resulting higher density there caused massive sinking. Newly formed icy deep water spilled out of the subarctic North Pacific at depths of 2000-3000 meters merging into a southward flowing deep western boundary current. A warm, strong poleward current, moreover, formed at the surface. It released much heat into the atmosphere and supplied water for the Pacific deep overturning circulation," explains Yusuke Okazaki of the Japan Agency for Marine-Earth Science and Technology and lead author on the paper.

The deep overturning circulation in the Pacific may have also stirred up old carbon-rich deep waters, contributing to the increase in atmospheric CO2 concentration during the last glacial termination. "This could have catalyzed further warming and accelerated the glacial meltdown," says Laurie Menviel, also at the International Pacific Research Center and a co-author on this study.

The observational evidence for these circulation changes comes from analyses of radiocarbon data taken from 30 sediment cores at various locations in the North Pacific. A comparison of the concentrations of radioactively decaying carbon in marine organisms (foraminifera) living at the surface and ocean bottom in various regions of the North Pacific Ocean yields information about the ages of water masses over this time period. From this data, the scientists could reconstruct and draw a map of the altered circulation.

To complement these observational analyses, the authors used a computer model that simulates the interactions among the ocean basins, seaice, the atmosphere, land vegetation, and the global marine-carbon cycle. This "earth system model" was run under conditions that mimicked the catastrophic meltwater discharge from the retreating ice sheets 17,500 – 15,000 years ago and disrupted the heat engine in the North Atlantic.

The computer simulation pointed to the same reorganization of the North Pacific overturning circulation as the sediment core data. And both suggest that during this period, the North Pacific Ocean served as a kind of global backup generator to partly offset the global effects of plunging temperatures in the North Atlantic.

"An ultimate test for the proposed mechanisms would be a sediment-core transect through Kamchatka Strait. It would show changes in the water mass ages and flow rates in what would have been a bottleneck for the southward flowing deep currents in the Pacific during the early Mystery Interval," concludes Timmermann. "In the meantime our findings caution against the Atlantic-centric view of abrupt climate change that has prevailed amongst climate scientists for the last 20 years. They highlight the complicated adjustments happening in the global ocean during these periods of climate change, in which the North Pacific was definitely a player to be considered."

NSF Interview with Axel Timmermann at the International Pacific Research Center was conducted with Lily Whiteman. The interview will be posted at http://www.nsf.gov/news/news_summ.jsp?cntn_id=117283 at 2:00 pm U.S. Eastern Time Thursday, 08 July 2010.

The International Pacific Research Center (IPRC) of the School of Ocean and Earth Science and Technology (SOEST) at the University of Hawai`i at Mānoa, is a climate research center founded to gain greater understanding of the climate system and the nature and causes of climate variation in the Asia-Pacific region and how global climate changes may affect the region. Established under the "U.S.-Japan Common Agenda for Cooperation in Global Perspective" in October 1997, the IPRC is a collaborative effort between agencies in Japan and the United States.

The North Pacific, a global backup generator for past climate change 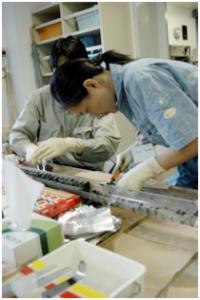