If you flew from the sea towards the land in the north slope of Alaska, you would cross from the water, over a narrow beach, and then to the tundra. From the air, that tundra would look like a landscape of room-sized polygonal shapes. Those shapes are the surface manifestations of the ice in the frozen ground below, a solidified earth known as permafrost.

Scientists long believed the solid permafrost extended offshore: from the tundra, below that narrow beach and below the seafloor declining at a gentle slope. They viewed that permafrost like solid brick, locking the subsurface--and the vast amounts of carbon it holds--in place.

But new research led by Micaela Pedrazas, who earned her masters at The University of Texas at Austin Jackson School of Geosciences working with Professor Bayani Cardenas, has upended that paradigm. They found permafrost to be mostly absent throughout the shallow seafloor along a coastal field site in northeastern Alaska. That means carbon can be released from coastline sources much more easily than previously thought.

The study was published in Science Advances on Oct. 23 with coauthors from the Jackson School and UT's Marine Science Institute.

Using a geophysical technique called electrical resistivity imaging, the researchers mapped the subsurface beneath Kaktovik Lagoon along the northeastern coast of Alaska over the course of three years.

The results were unexpected. The beach and seafloor were entirely ice-free down to at least 65 feet. On the tundra itself, ice-rich permafrost was detected in the top 16 feet, but below that, the subsurface their imaging mapped was also ice-free.

"This leads to a new conceptual model," Pedrazas said.

Permafrost is found in cold climates that remain frozen during the course of the year. Scientists have been tracking the impact of a warming climate on permafrost because as it melts, permafrost releases its stores of frozen carbon into the atmosphere as methane and carbon dioxide, contributing to climate change.

Permafrost studies have almost exclusively focused on the region beneath the tundra. Because it's not easy to work in such remote locations and under harsh weather conditions, the transition from sea to shore has been largely ignored.

"This study tells us that the coastline is much more complicated than we thought," said co-author Jim McClelland from UT's Marine Science Institute. "It opens up the possibility for routes of water exchange that we weren't thinking about."

Besides global considerations, the work has local impacts. The communities along the coast, most of whom are Inupiat, live on the permafrost. As the permafrost thaws, it accelerates coastal erosion, which carves away at the land on which homes and infrastructure stand. In the Kaktovik region, erosion can be as great as 13 feet per year.

"Their cultural heritage and their welfare is integrated and intricately linked to their environment," Cardenas said. "There's an immediate need to understand what's happening in these lagoons."

The new paradigm requires reimagining the coastal Arctic ecosystem as well. Liquid groundwater means that carbon and nutrients can move between the tundra and the lagoon. It also means that saltwater can move beneath the tundra, potentially affecting freshwater sources.

Paul Overduin, who wasn't involved in the research, but who studies permafrost at Alfred Wegener Institute Helmholtz Centre for Polar and Marine Research, said that this work is the first step in understanding permafrost's transition from sea to shore.

"As is often the case, when we start looking at something people don't know much about, you open up a whole bunch of questions that needed to be looked at," he said. "That's what's really exciting here."

The research was funded by the Geology Foundation at The University of Texas at Austin and the National Science Foundation through the Beaufort Lagoon Ecosystems LTER, the Geological Society of America and the Ivanhoe Foundation. The Kaktovik Inupiat Corporation and the U. S. Fish and Wildlife Service also provided permissions and support. 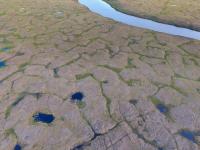 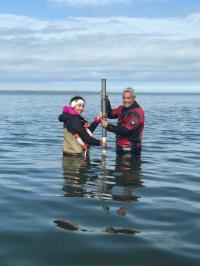