Red ginseng, which has long been used as an ingredient in traditional Korean medicine, has recently drawn increased attention as a functional material for its health-promoting effects. The composition and activities of red ginseng vary depending on the processing method, and this has become an active area of research. Recently, a research team in Korea has entered the spotlight as they discovered that red ginseng has inhibitory effects against lung cancer metastasis.

Dr. Ham of KIST developed a new microwave processing method for red ginseng that is based on the same principle as a microwave oven, which when compared to existing processing methods, such as repetitive steaming and drying, increases the concentration of the three main active components, Rg3, Rk1, and Rg5, more than 20 times. The research team previously demonstrated that red ginseng produced by this microwave processing method, which they have called KMxG, is effective against prostate, cervical, and skin cancers, and has protective effects against by drug-induced kidney damage. This technology was transferred to Ponin Bio Co., Ltd. in 2020 for a technology fee of KRW 800 million and is currently being developed for commercialization.

Unlike normal cells, which die when separated from their original tissue, cancer cells can spread to other tissues where they invade and grow, in a process called metastasis. TGF-β1, a cytokine protein that functions as a signaling substance in the body, induces lung cancer metastasis and promotes the development of stem cell-like properties in cancer cells. The KIST research team treated lung cancer cells with Rk1 and Rg5, the main components of KMxG red ginseng and showed that both components effectively inhibited various processes related to cancer metastasis induced by TGF-β1.

"Although components of red ginseng previously have been shown to kill cancer cells, this study proved that these components of red ginseng have other anti-cancer effects and can inhibit lung cancer metastasis. This provides scientific evidence that may lead to the future development of anti-cancer drugs derived from natural products," remarked Dr. Ham. He added, "Because we can control the active ingredient contents of red ginseng by using microwave processing methods like the one that produced KMxG, it may be possible to develop customized functional materials for various diseases."

This study was conducted as part of a major program at KIST with financial support from the Ministry of Science and ICT (MSIT) and also supported by the nano-convergence industrial core technology development program funded by the Ministry of Trade, Industry, and Energy (MOTIE). The results of the study were published in a recent issue of 'Journal of Ginseng Research' an international journal in the field of ginseng research.

A schematic diagram of the inhibition of lung cancer metastasis 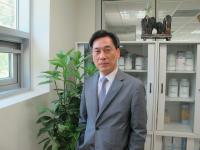