Insects rely on a mix of floral resources for survival. Populations of bees, butterflies, and flies are currently rapidly decreasing due to the loss of flower-rich meadows. In order to deal with the widespread loss of fauna, the European Union supports "greening" measures, for example, the creation of flower strips.

A group of scientists from the University of Munich, led by Prof. Susanne S. Renner, has conducted the first quantitative assessment of the speed and distance over which urban flower strips attract wild bees, and published the results of the study in the open-access Journal of Hymenoptera Research.

Flower strips are human-made patches of flowering plants that provide resources for flower-visiting insects and insect- and seed-feeding birds. Previous experiments have proved their conservation value for enhancing biodiversity in agricultural landscapes.

"We identified and counted the bees visiting flowers on each strip and then related these numbers to the total diversity of Munich's bee fauna and to the diversity at different distances from the strips. Our expectation was that newly planted flower strips would attract a small subset of mostly generalist, non-threatened species and that oligolectic species (species using pollen from a taxonomically restricted set of plants) would be underrepresented compared to the city's overall species pool," shared Prof. Susanne S. Renner.

Bees need time to discover new habitats, but the analysis showed that the city's wild bees managed to do that in just one year so that the one-year-old flower strips attracted one-third of the 232 species recorded in Munich between 1997 and 2017.

Surprisingly, the flower strips attracted a random subset of Munich's bee species in terms of pollen specialization. At the same time, as expected, the first-year flower-strip visitors mostly belonged to common, non-threatened species.

The results of the study support that flower strip plantings in cities provide extra support for pollinators and act as an effective conservation measure. The authors therefore strongly recommend the flower strip networks implemented in the upcoming Common Agricultural Policy (CAP) reform in the European Union.

How quickly do flower strips in cities help the local bees? 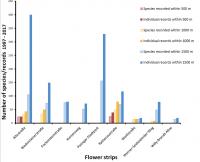