University of Guam research has revealed that younger cycad seeds pose a greater risk for toxicity when consumed than more mature seeds, bringing the scientific community one step closer to understanding the origins of a neurodegenerative disease prevalent on Guam in World War II and closer to understanding related neurological disorders elsewhere. The research was the cover story of the June 2020 issue of Horticulturae, a peer-reviewed journal published by MDPI.

Of interest in recent decades has been the role of cycads as a possible toxin source that influenced one of only two known clusters of a rare neurological disease called sporadic amyotrophic lateral sclerosis, or ALS.

Residents of Guam emerged from World War II exhibiting the neurodegenerative disease with an incidence that was 50 to 100 times more prevalent than in North America. The unprecedented spike in Guam's incidence was described in the early 1950s, and the epidemiology strongly suggested an environmental cause. The island's residents suffered through a war-time occupation from 1941--1944 that led to widespread malnutrition and increased reliance on non-farm food sources, such as seeds from Guam's native cycad, known as Cycas micronesica by botanists and "fadang" in the local language.

"The increased reliance on cycad seeds as a source of dietary starch during the years of the occupation has been one of the proposals for what appears to be an ephemeral increase in exposure to an environmental factor," said Neuroscientist Christopher A. Shaw, professor of ophthalmology at the University of British Columbia and one of the authors of the study.

Shaw has been actively studying the phenomenon for more than 20 years.

The 70-year history of medical research has identified numerous toxins in the cycad tissues that were used for human consumption on the island. But no single toxin or combination of toxins has emerged as the clear-cut culprit of neurodegeneration.

"We became interested in determining the co-varying environmental and human factors that interacted with the toxin exposure as a means of developing a greater understanding of the etiology," Shaw said.

Some of the ambiguity that defines the history of research on the topic has resulted from inadequate control over plant and environmental factors that may have directly influenced cycad toxin concentrations.

"We felt that part of that was because a plant scientist was missing from the decades of research teams," said Adrian Ares, associate director of the Western Pacific Tropical Research Center at the University of Guam. "Our plant physiology laboratory partnered with the Shaw Laboratory to identify some of these co-varying factors to better refine the interpretations of past and contemporary research results."

The team has been publishing their research results since 2005, and the latest addition to the established literature sheds light on the seed sampling problems associated with an inability to determine the age of harvested seeds. All seeds that exhibit a dark brown external color are harvested for human consumption. The onset of this seed color occurs as early as 17 months in age, but seeds may persist on the trees for periods longer than 30 months. Therefore, harvested brown seeds may contrast more than one year in age.

The Guam-Canada team has shown that several secondary metabolites that serve as neurotoxins decline with seed age, so younger seeds appear to pose a greater risk of toxin exposure than older seeds. The authors contend that past research has overlooked this source of variation by not reporting seed age in the methods.

Their current publication defined two derived measurements based on fresh or dry weight of the seed components that created models useful for estimating seed age. These models can be used in future research to add clarity to and validity of the methods.

"Results from this research inform the ongoing attempts to identify environmental toxicants that pose a risk through chronic low-level exposures in many regions of the globe rather than acute high-level exposures in one location," Ares said.

Guam study advances research of cycads as an ecotoxin 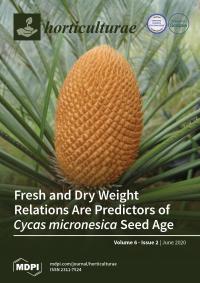