CHAMPAIGN, Ill. -- Scientists deployed motion-sensitive camera traps across a 50-square-mile swath of Bukit Barisan Selatan National Park in southern Sumatra and, over the course of eight years, recorded the haunts and habits of dozens of species, including the Sumatran tiger and other rare and endangered wildlife. Their observations offer insight into how abundant these species are and show how smaller creatures avoid being eaten by tigers and other carnivores.

They report their findings in the journal Animal Biodiversity and Conservation.

"A lot of my research focuses on natural history, where I'm trying to understand behaviors and aspects of ecology that no one has been able to record before," said Max Allen, a wildlife ecologist at the Illinois Natural History Survey who led the research. "And camera traps are a good way to document a community of terrestrial animals." The INHS is a division of the Prairie Research Institute at the University of Illinois at Urbana-Champaign.

The frequency and time of sightings revealed that the tigers were most active during the day, with the majority of sightings in midday. The species that compete with tigers as top carnivores appeared to be doing their best to avoid going out during the tigers' peak activity times.

For example, camera sightings of Sumatran clouded leopards - which are not strictly nocturnal - dropped off precipitously in the hours before noon and picked up a bit in late evening, when tigers were rarely seen. Sumatran tigers and Sunda clouded leopards compete for larger prey, and tigers are likely to attack them on sight, Allen said.

The behavior of smaller cats, however, suggests that they do not fear or actively avoid tigers.

"The daytime activity of the marbled cat, for example, actually overlaps highly with that of the tigers," Allen said. It's likely the marbled cats are small enough to be eating prey - like rodents - that are of no consequence to tigers.

Despite their limitations, camera traps often capture things that people surveying in the wild will miss, Allen said.

"There are a lot of interesting behaviors that we just can't capture through classic field methods that camera trapping allows us to document," he said. For example, in an earlier camera-trap study of Sunda clouded leopards in Borneo, Allen and his colleagues discovered that the male clouded leopards would scent mark, scratching and urinating to establish their territory and to attract mates - something other researchers had never observed before.

"There are gaps in our knowledge that camera traps can fill," Allen said. "It would be difficult to document these behaviors and interactions by other means."

The paper "Terrestrial mammal community richness and temporal overlap between tigers and other carnivores in Bukit Barisan Selatan National Park, Sumatra" is available online and from the U. of I. News Bureau. 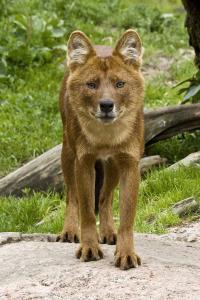