Even though the family of click beetles (Elateridae) contain approximately 10,000 species worldwide, it is only about 200 species able to emit light, and they inhabit Latin America and Oceania. Interestingly, the position of the luminous organs varies amongst the different click beetle lineages. In some, they are found on the foremost of the three thoracic segments of the body (prothorax), in others - on both the prothorax and the abdomen, and in few - only on the abdomen.

"In 2017, during an expedition to the western Yunnan in China, we discovered a dusk-active bioluminescent click beetle with a single luminous organ on the abdomen, " recalls lead scientist Mr. Wen-Xuan Bi.

Since no bioluminescent click beetle had previously been recorded in Asia, the team conducted simultaneous morphological and molecular analyses in order to clarify the identity of the new species and figure out its relationship to other representatives of its group.

"The morphological investigation in combination with the molecular analysis based on 16 genes showed that our taxon is not only a new species in a new genus, but that it also represents a completely new subfamily of click beetles. We chose the name Sinopyrophorus for the new genus, and the new subfamily is called Sinopyrophorinae."

In conclusion, the discovery of the new species sheds new light on the geographic distribution and evolution of luminescent click beetles. The authors agree that as a representative of a unique lineage, which is only distantly related to the already known bioluminescent click beetles, the new insect group may serve as a new model in the research of bioluminescence within the whole order of beetles. 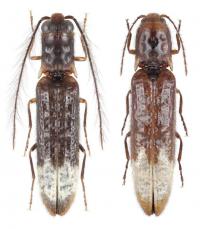