The newly developed method lets researchers rapidly and accurately measure stress hormones in snow leopards without the need for bulky equipment or specialised knowledge. It uses widely available equipment that can be carried into the field, allowing hormone extraction from faecal samples and analysis to be done on site.

This differs from existing approaches to hormone monitoring in wild animals, where faecal samples must be taken to laboratories for hormone extraction and analysis. These approaches are particularly limiting in remote locations, such as the Himalayas.

"Because conventional hormone monitoring methods require frozen and refrigerated chemical reagents, and laboratory equipment, it is almost impossible to use them on-site." explained Dr Kodzue Kinoshita of Kyoto University and author of the study.

The new method developed by Dr Kinoshita extracts hormones from snow leopard faeces by shaking a container with the sample mixed with ethanol by hand. A process called immunochromatography, which is used in pregnancy tests, is used to detect hormone concentrations using test strips and a smartphone application then analyses them.

The accuracy of the new method was tested on faecal samples from captive snow leopards at Kohu Yuki Zoo, Asahikawa City Asahiyama Zoo, and Nagoya Higashiyama Zoo and Botanical Gardens in Japan. Comparisons to conventional methods found that similar hormone concentrations were extracted and changes in these concentrations were also accurately detected.

Stress in animals can be associated with reduced reproductive function, so finding out what in the environment stresses animals is important for conservation.

"Simple methods like this, will allow researchers, rangers, and zookeepers, to quickly and easily assess the stress status of snow leopards." said Dr Kinoshita. "Getting this insight will be useful for the management of animal welfare and conservation planning."

Dr Kinoshita added that the new technique could also be applied to captive snow leopards and other animals. "The hormone analysed in this method is generally not species-specific, so this method can be used to assess various species, including domestic, experimental, zoo, and wild animals."

Snow leopards are listed as 'vulnerable' on the IUCN red list and are threatened by poaching, retaliatory killings for livestock attacks and climate change. It's feared these continued pressures will increase stress in snow leopards, further contributing to population declines.

The novel method Dr Kinoshita developed in this study involves adding ethanol to collected snow leopard faeces and then shaking the container with two zirconia beads by hand for two minutes to extract the hormones. The extract is then dropped onto the immunochromatography test strip which turns red as a result of an antigen-antibody reaction, indicating the presence of adrenocortical stress hormones. A smartphone app is used to measure the hormone concentration from the intensity of the colour.

Although this novel method could be applied to the other species, Dr Kinoshita warns that this will need to be tested for each species to ensure the stress hormones detected in the faeces accurately reflects the stress of the animal, as these levels will vary between species.

"As a next step, I would like to apply this method to various other animals and make it more reliable." said Dr Kinoshita. "I would also like to apply it to not only to wild animals, but also to zoo animals and pets to clarify the stress of these animals and improve their living environment." 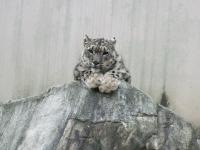