A few years before NASA astronaut Jessica Meir began learning to fly a spacecraft for her upcoming trip to the International Space Station, she was in flight-training of a different kind: teaching bar-headed geese how to fly in a wind tunnel at the University of British Columbia.

The goal was to understand how the birds -- who are famed for their long migrations between Mongolia, China and India -- frequently fly in severely low oxygen at extreme altitudes between 5000 to 6000m, or even as high as the summits surrounding Mt. Everest, which are at roughly 8500m. The findings of the research were published today in eLife.

"Flapping wings in flight is very metabolically costly and requires an enormous amount of oxygen -- and to do that where the air is so thin is remarkable," said Meir, who led the study as a postdoctoral fellow at UBC zoology. "We found that the geese maintained flight in extremely low oxygen levels in the wind tunnel by reducing their metabolism compared to when flying in normal oxygen levels."

While previous research suggested the geese have adaptations that allow them to maximize oxygen use at high altitudes, this study is the first to comprehensively measure their physiology during flight at simulated altitudes in a wind tunnel and gauge the associated metabolic costs.

But gathering the data required a little ingenuity, so Meir and her former UBC colleague Julia York each became mother goose to a gaggle of little bar-headed goslings born and bred at sea level.

As the first living things the birds saw when they hatched, the geese "imprinted" on Meir and York, allowing the pair to train the birds to fly in a wind tunnel wearing a face mask and a tiny backpack containing measuring equipment.

The researchers found that six of the seven birds that could fly in the tunnel were willing to fly in moderately low-oxygen levels around 5500m. Three of the birds also flew in severely low-oxygen conditions comparable to roughly 9000m, the maximum altitude at which bar-headed geese have been anecdotally reported to fly in the Himalayas.

"We found that during flight, the metabolic rate of these birds increased 16-fold from rest, along with an increase in the amount of oxygen transported per heartbeat and a smaller increase in heart rate," said principal investigator Bill Milsom, a professor emeritus at UBC zoology who has studied the geese for over a decade. "In comparison, humans and most animals can at best increase their metabolism ten-fold, so this is a remarkable capacity."

And when the going got tough, it appeared the birds actually became more efficient.

"We measured a drop in the metabolic cost of birds flying at the equivalent of 5500m in the wind tunnel, compared to flying at sea level oxygen conditions," said Meir. "When we decreased the oxygen further to the equivalent of roughly 9000m, the drop was even more extreme."

Data on heart rate, the rate of oxygen consumption and carbon dioxide production and blood temperature provided insights into the physiology underlying this unique ability.

"We were surprised to find that their heart rate during flight in reduced oxygen was no higher than during flights in normal oxygen levels," said co-author York, an undergraduate student at UBC at the time of the study and currently a PhD candidate at the University of Texas at Austin. "We also saw that the temperature in their veins decreased during our simulated flights, which is hypothesized to significantly increase the amount of oxygen they can carry in their blood."

Determining how these results relate to longer migratory flights of bar-headed geese at high altitudes will require further work to measure the physiological variables in the wild, or during longer flights in normal, low-oxygen and low-pressure conditions.

"Our findings are also relevant to all physiological and biomedical fields involving animals and humans in low-oxygen environments, from medical conditions such as heart attacks and strokes to procedures like organ transplants," said Meir.

For Meir, who has spent a good chunk of her career studying the physiology of animals in extreme environments, her trip to space on Sept. 25 is a turning of the tables, of sorts. Among the scientific experiments she will be supporting during her six-month mission, Meir will study how her own body responds to the extremes of space.

"It only seems fitting that it's now my turn to serve as the subject for many human physiology research experiments aboard the International Space Station," she said. 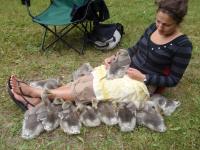