RIVERSIDE, Calif. — Most researchers imagine the initial oxygenation of the ocean and atmosphere to have been something like a staircase, but with steps only going up. The first step, so the story goes, occurred around 2.4 billion years ago, and this, the so-called Great Oxidation Event, has obvious implications for the origins and evolution of the first forms of eukaryotic life. The second big step in this assumed irreversible rise occurred almost two billion years later, coinciding with the first appearances and earliest diversification of animals.

Now a team led by geochemists at the University of California, Riverside challenges the simple notion of an up-only trend for early oxygen and provides the first compelling direct evidence for a major drop in oxygen after the first rise.

"Our group is among a subset of scientists who imagine that oxygen, once it began to accumulate in the ocean-atmosphere system, may have ultimately risen to very high levels about 2.3-2.2 billion years ago, perhaps even to concentrations close to what we see today," said Timothy Lyons, a professor of biogeochemistry and the principal investigator of the project. "But unlike the posited irreversible rise favored by many, our new data point convincingly to an equally impressive, and still not well understood, fall in oxygen about 200 million years later."

According to Lyons, this drop in oxygen may have ushered in more than a billion years that were marked by a return to low-oxygen concentrations at Earth's surface, including the likelihood of an oxygen-free deep ocean.

"It is this condition that may have set the environmental stage and ultimately the clock for the advance of eukaryotic organisms and eventually animals," he said.

Study results appear online this week in the Proceedings of the National Academy of Sciences.

"The time window between 2.3 and 2.1 billion years ago is famous for the largest and longest-lived positive carbon isotope excursion in Earth history," said Noah Planavsky, a recent Ph.D. graduate from UC Riverside, current postdoctoral fellow at Caltech, and first author of the research paper.

He explained that carbon isotopes are fractionated during photosynthesis. When organic matter is buried, oxygen is released and rises in the biosphere. The burial of organic matter is tracked by the positive or heavy isotopic composition of carbon in the ocean.

"Some workers have attributed the carbon isotope excursion to something other than organic burial and associated release of oxygen," Planavsky said. "We studied the sulfur isotope composition of the same rocks used for the carbon isotope analyses — from Canada, South Africa, the U.S., and Zimbabwe — and demonstrated convincingly that the organic burial model is the best answer."

The researchers' sulfur data point to high sulfate concentrations in the ocean, which, like today, is a classic fingerprint of high oxygen levels in the ocean and atmosphere. Sulfate, the second most abundant negatively charged ion in the ocean today, remains high when the mineral pyrite oxidizes easily on the continents and is buried in relatively small amounts in the oxygen-rich ocean.

"What is equally impressive is that the rise in oxygen was followed by a dramatic fall in sulfate and therefore oxygen," Lyons said. "Why the rise and fall occurred and how that impacted the billion years or more of ocean chemistry that followed and the life within that ocean are hot topics of research."

The research team is thrilled to have found strong chemical evidence for oxygen variability on the early Earth.

"The idea that oxygen levels at Earth's surface went up and down must be vital in any effort to understand the links between environmental and biological evolution on broad, geologic time scales," Planavsky said.

The University of California, Riverside (www.ucr.edu) is a doctoral research university, a living laboratory for groundbreaking exploration of issues critical to Inland Southern California, the state and communities around the world. Reflecting California's diverse culture, UCR's enrollment has exceeded 20,500 students. The campus will open a medical school in 2013 and has reached the heart of the Coachella Valley by way of the UCR Palm Desert Center. The campus has an annual statewide economic impact of more than $1 billion. A broadcast studio with fiber cable to the AT&T Hollywood hub is available for live or taped interviews. UCR also has ISDN for radio interviews. To learn more, call (951) UCR-NEWS.

Oxygen's ups and downs in the early atmosphere and ocean 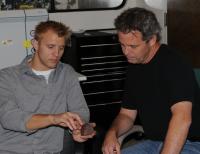