Apes in U.S. zoos host bacterial communities in their intestinal tracts that are more similar to those of people who eat a non-Western diet than to the gut makeup of their wild ape cousins, according to a new study from Washington University in St. Louis. Further, even wild apes that have never encountered antibiotics harbor microbes with antibiotic resistance genes.

The findings suggest that contact with people shapes the gut microbial communities, or microbiomes, of gorillas and chimpanzees, and that the gut microbiomes of wild apes provide clues to human-ape interactions that could inform efforts to protect the endangered species. The study also highlights a way to identify new antibiotic resistance genes before they become widely established in bacteria in people, giving researchers time to develop tools to counter such genes before they threaten human health.

The study is available online in The ISME Journal.

The gut microbiome supplies us with vitamins, helps digest food, regulates inflammation and keeps disease-causing microbes in check. Antibiotics can change the makeup of the gut microbiome in lasting ways.

"It's difficult to figure out exactly how antibiotics affect the human gut microbiome when almost everyone is born with bugs that already have antibiotic resistance genes," said senior author Gautam Dantas, PhD, a professor of pathology and immunology, of molecular microbiology, and of biomedical engineering at Washington University School of Medicine. "Wild apes are the closest thing we have to pre-antibiotics humans. Luckily, we got the opportunity to work with two highly respected primatologists."

Co-authors Crickette Sanz, PhD, an associate professor of biological anthropology in Arts & Sciences at Washington University, and David Morgan, PhD, a research fellow at the Lester E. Fisher Center for the Study and Conservation of Apes at Lincoln Park Zoo in Chicago and an honorary research scientist at Washington University, study wild chimpanzees and gorillas in a remote area of Nouabalé-Ndoki National Park in the Republic of Congo. The park is managed by the Wildlife Conservation Society and the Congolese government. To learn about the apes' gut microbiomes, Sanz, Morgan and their field teams followed apes in known groups and discreetly collected fecal samples from 18 wild chimpanzees and 28 wild gorillas. The noninvasive sampling method allowed the researchers to collect data on the apes without disturbing them.

The samples were stored in liquid nitrogen, carried to the park headquarters, and transported by dugout canoe down the Sangha River and then by truck to Brazzaville, the capital of the Republic of Congo, where they were held in a freezer until they could be shipped to Dantas' lab. The researchers also collected and shipped fecal samples from 81 people who lived on the outskirts of the park.

Meanwhile, Dantas and first author Tayte Campbell, PhD - then a graduate student in Dantas' lab - arranged to obtain fecal samples from 18 chimpanzees and 15 gorillas living at either the Saint Louis Zoo or the Lincoln Park Zoo. The researchers identified the kinds of bacteria and the antibiotic genes present in the gorilla, chimpanzee and human samples, and compared the results to publicly available data on people who live in the U.S., Peru, El Salvador, Malawi, Tanzania, or Venezuela and follow hunter-gatherer, rural agriculturalist, or urban lifestyles.

The gut microbiomes of people whose data was included in the study fell into two groups. In one were hunter-gatherers and rural agriculturalists who typically eat a diet heavy in vegetables and light in meat and fat; this group included the people from the outskirts of the national park in the Republic of Congo. In the second group were urban people who eat a meat-rich Western diet. Wild gorillas and chimpanzees formed a third group distinct from both human groups. But captive apes fell into the first group; they were most similar to people who ate non-Western diets.

"Chimpanzees are endangered, and Western lowland gorillas are critically endangered; their main threats are habitat destruction, poaching and disease," Sanz said. "Measuring the gut microbiome could be a way to monitor apes' exposure to anthropogenic threats so we can identify areas of concern and develop effective, evidence-based mitigation strategies."

"Rare sampling opportunities of wild apes like in this study gives us a look into the future," Campbell said. "When we find these novel antibiotic resistance genes in the environment, we can study them and possibly find ways to inhibit them before they show up in human pathogens and make infections very difficult to treat."

"It would be very interesting to expand this research across a broader range of conservation contexts, such as commercial logging zones and tourist operations," Morgan added. "With the arrival of human activities and associated anthropogenic disturbances, wild apes may be exposed to antibiotic resistance genes. We don't know much about how antibiotic resistance spreads through natural environments, so that could have implications for human public health that we don't yet understand. That's something we'd like to investigate." 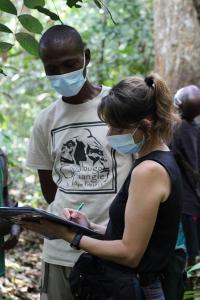