Recently, a research team from the Faculty of Human Development at the University of Toyama, in collaboration with the Department of Computer Science and Engineering from Toyohashi University of Technology, designed an experimental method to investigate the effect of social contingency on perceptual distance by measuring the size of an afterimage online.

Sixty-six volunteer participants were assigned to one of three conditions in the manipulation phase (Figure 1). In the contingent condition, each participant was shown a photograph of a neutral female face. This photograph changed to a photograph of a smiling face after the participant pressed a button provided to them by the researchers. In the non-contingent condition, the neutral face changed to the smiley face at random times, irrespective of the participant's button-pressing. In the unresponsive condition, the neutral face was constantly presented although participants pressed the button in the same manner as in the other conditions. One hundred trials were performed in the manipulation phase.

In the following test phase, participants observed the neutral face for 30 seconds at a viewing distance of 57cm, and were presented with an afterimage projected on a screen at three different viewing distances: 114, 171, and 228 cm. The perceived size of the afterimage increased with the viewing distance. It was basically consistent with Emmert's law.

Professor Atsushi Sato, the leader of the research team at the University of Toyama said, "Previous studies are criticized for not showing the true top-down effects on perception because of pitfalls such as an inability to disentangle post-perceptional judgment from actual online perception, task demands, and differences in the low-level visual features of the stimuli across experimental conditions. Our method of using a perceptual mechanism of size constancy can avoid such pitfalls and test directly the effect of social contingency on online perception."

Professor Michiteru Kitazaki, a perceptual psychologist at Toyohashi University of Technology explained, "The present study suggests that the social contingency can modulate the distance between self and other in a perceptual processing level that is automatic and nearly independent of our knowledge. Thus, social cognition seems more implicit than expected, and crucially connected to low-level perceptual processing in the brain."

Do you feel the other closer to you when she/he contingently responds to your action? The findings tell us that it is not just your false belief, but it is based on your automatic perception.

Do you feel the other closer to you when she/he contingently responds to your action? 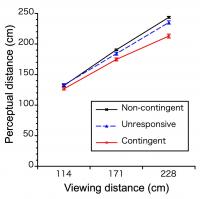