Like many social mammals, ravens form different types of social relationships – they may be friends, kin, or partners and they also form strict dominance relations. From a cognitive perspective, understanding one's own relationships to others is a key ability in daily social life ("knowing who is nice or not"). Yet, understanding also the relationships group members have with each other sets the stage for "political" maneuvers ("knowing who might support whom"). The results of this study have been published in the scientific journal Nature Communications.

A team of researchers led by Thomas Bugnyar of the Department of Cognitive Biology at the University of Vienna, set out to test third-party knowledge in captive groups of ravens. Using a playback design, they let individuals hear a dominance interaction between two other ravens. These interactions were either in accordance with the existing dominance hierarchy in that group or they reflected a possible rank reversal, whereby a low-ranking individual was showing off to a higher-ranking bird. In the latter case, the ravens reacted strongly with information seeking and stress-related behaviors, such as head turns and body shakes, suggesting that their expectations about how the dominance relations among others should look like were violated. Similar to primates, ravens thus keep track of the rank relations of their group members.

Importantly, the researchers found that the ravens not only responded to simulated rank reversals in their own group but also to those in the neighboring group. These findings suggest that ravens can deduce others' rank relations just by watching them. Moreover, it is the first time that animals are shown to be capable of tracking rank relations among individuals that do not belong to their own social group.

Lead-author Jorg Massen underlines the importance of this latter finding by referring to an example from the popular television series "The Sopranos": "When Tony Blundetto made fun about Tony Soprano, as spectators of the show, we immediately recognized that this was inappropriate with regard to the dominance order within the Soprano family. As we are not part of the Soprano family, we make this inference not by comparing our own rank relation with the two Tony's with each other, but instead we have a mental representation of the rank relation of the two that gets violated in the turn of these events", and: "As the birds in our experiment never had any physical contact with their neighboring group and could only see and hear them, these results suggest that ravens also have mental representations about others", ends Massen.

Ravens understand the relations among others 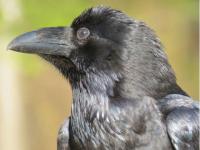