EAST LANSING, Mich. - Much like a finger leaves its own unique print to help identify a person, researchers are now discovering that skull fractures leave certain signatures that can help investigators better determine what caused the injury.

Implications from the Michigan State University research could help with the determination of truth in child abuse cases, potentially resulting in very different outcomes.

Until now, multiple skull fractures meant several points of impact to the head and often were thought to suggest child abuse.

Roger Haut, a University Distinguished Professor in biomechanics, and Todd Fenton, a forensic anthropologist, have now proven this theory false. They've found that a single blow to the head not only causes one fracture, but may also cause several, unconnected fractures in the skull. Additionally, they've discovered that not all fractures start at the point of impact - some actually may begin in a remote location and travel back toward the impact site.

The team's findings were recently presented at the annual meeting of the American Academy of Forensic Sciences.

"It's a bit like smashing raw hamburger into a patty on the grill," Haut said. "When you press down on the meat to flatten it, all the edges crack. That's what can happen when a head injury occurs."

Because piglet skulls have similar mechanical properties as infant human skulls - meaning they bend and break in similar ways - Haut and Fenton used the already deceased specimens in their research and found they were able to classify the different fracture patterns with a high degree of accuracy.

"Our impact scenarios on the piglet skulls gave us about an 82 percent accuracy rate, while on the older skulls, it improved to about 95 percent," Fenton said.

To help them get to this level of accuracy, both researchers teamed up with Anil Jain, a University Distinguished Professor in computer science and engineering at MSU, to develop a mathematical algorithm to help classify the fractures.

"A major issue in child death cases is you never really know what happened," Haut said. "The prosecutor may have one idea, the medical examiner another, and the defendant a completely different scenario."

Fenton and Haut's close relationship with medical examiners often results in them being called upon in certain, hard-to-determine cases. They've used this new knowledge to help solve these cases, but both are also looking to use Jain's algorithm in an online resource that will provide even more assistance to investigators.

The team is currently developing a database, or Fracture Printing Interface, that will allow forensic anthropologists and investigators to upload human fracture patterns from different abuse cases and help them determine what most likely caused an injury.

"We will never know with 100 percent probability what happened in many of these cases, but this interface will give us a higher chance of figuring that out," Haut said.

Their research has been funded through multiple grants from the National Institute of Justice. 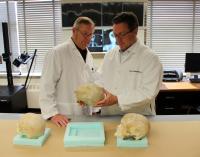